Tipping at Restaurants Needs to Stop

I don't like tipping restaurant servers. Don't get me wrong. I always leave a generous tip after dining at a sit-down restaurant that offers real table service. I just don't like the culture of tipping. I'd much prefer that food prices include the commonly expected gratuity amount up front. 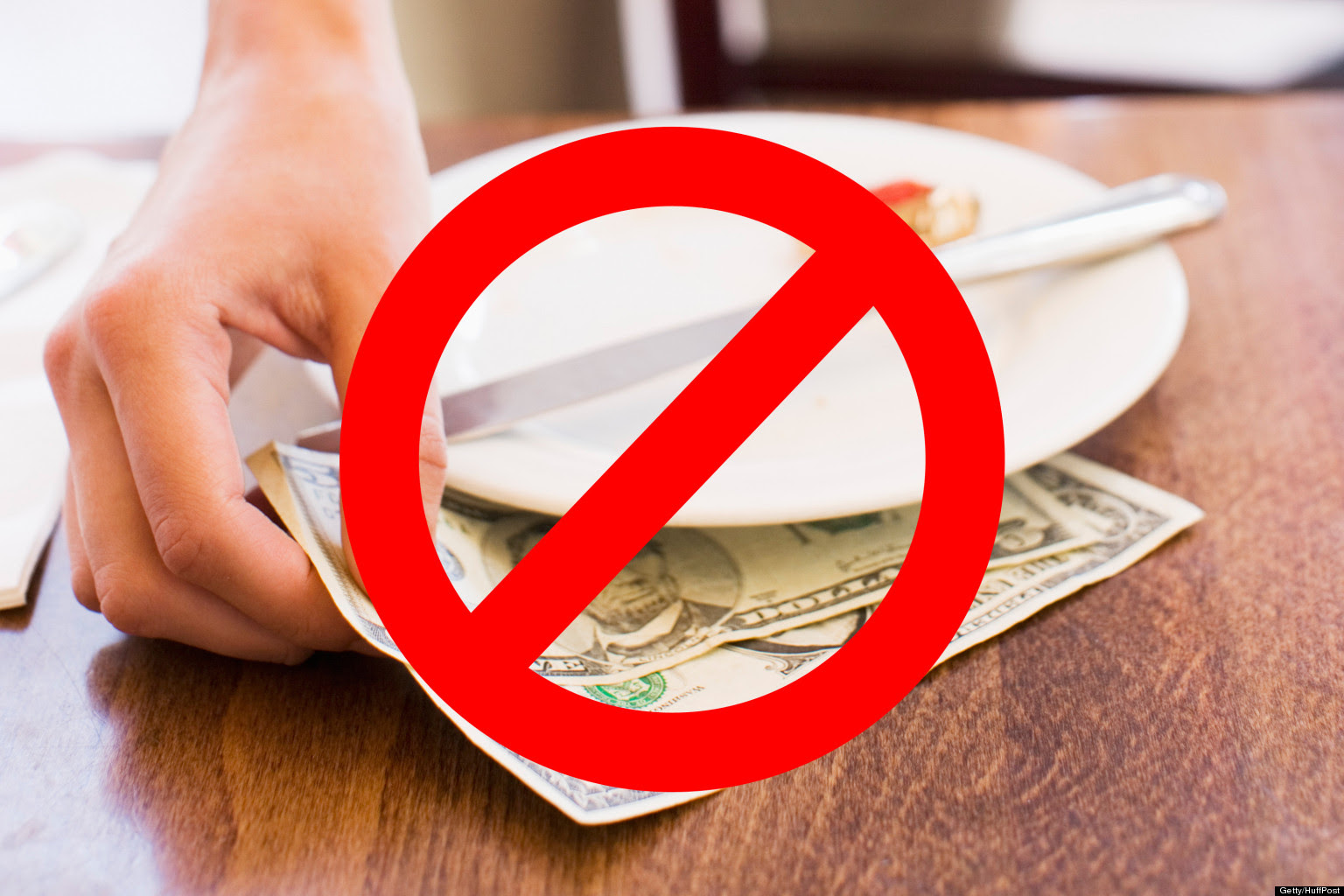 Where did the tradition of tipping food servers come from anyway? Some sources say that it was popularized in Europe, where it originated with the elite offering extra payment for better service and pampering. Over time it worked its way down the economic chain as employers used the tips paid to servers as an excuse to reduce wages, until tipping became generally expected.

The process was then repeated in this country in the late 19th Century when members of the American elite brought the practice back from their European vacations. Bryan Palmer writes in this Slate article that many Americans considered tipping to be bribery back then. Once again, tipping sifted down through economic levels until it is now so ingrained that many can't fathom it ever being different.

Those that defend tipping say that it is the only way to incent servers to provide good service. They think tipping gives them power over the server. This is ridiculous. Servers only find out after you've left the restaurant what your tip amount was. Unless the server knows up front that you are likely to offer a significantly different tip based on service provided, it can't work.

Even when servers do know your tipping practices it rarely changes the quality of their service. As Palmer explains, "The factors that correlate most strongly to tip size have virtually nothing to do with the quality of service." Studies show that "Quality of service has a laughably small impact on tip size."

Servers know that it's a crap shoot as to whether a customer will provide a good tip or not. They know that their actions have little impact on the tip amount. Besides, the idea that servers do a better job for us if we leave a tip after the service is completed suggests that servers are somehow different from the rest of us who work to keep our jobs and to feel successful in the work we do.

In this Slate article about his tip-free restaurant, Jay Porter writes, "The next time you see your doctor, ask her if she wouldn't do better-quality work if she made minimum wage, with the rest of her income from her patients' tips. I suspect the answer will be a version of “no.”"

Would having a significant portion each half hour's wage determined by the fickle opinions and moods of some customer you may never see again improve your job performance? Even if you answered yes, would that paradigm make you feel better about your job?

Porter explains what happened after abolishing tipping at his restaurant:


When we switched from tipping to a service charge, our food improved, probably because our cooks were being paid more and didn't feel taken for granted. In turn, business improved, and within a couple of months, our server team was making more money than it had under the tipped system. The quality of our service also improved. In my observation, however, that wasn't mainly because the servers were making more money (although that helped, too). Instead, our service improved principally because eliminating tips makes it easier to provide good service.

Why did it work this way at Porter's restaurant? Because workers had predictability in the pay they received for their jobs, which is how it pretty much works for all other employees in America. Also, workers negotiated their pay with their employer, not with countless third parties passing through their work stations. Better service occurs when workers are happier and more satisfied, not when they are operating under the fear of underpayment caused by circumstances beyond their control.

Both Palmer and Porter explain how tipping encourages racist and sexist behavior toward customers that are outside of the middle aged white guy genre, the people servers favor because it is well established that they pay the best tips. Both authors describe how tipping is bad for restaurants because of disincentives caused by tip sharing, legal problems caused by a morass of confusing federal and state policies, and incentives to engage in shoddy employment practices.

So if we got rid of tipping, how would people express their pleasure or displeasure with their restaurant experiences? To me this seems like one of those proverbial stupid questions that teachers are fond of insisting are nonexistent. How do you express your feelings about your experience with the multitudes of other products and services you purchase? Why in the world should it be any different for the restaurants you patronize?

Clearly not everybody is on board with dumping the practice of tipping. Tracy Saelinger explains why in this Today article. Her examples of shoddy service rely on anecdotal rather than more empirical evidence. She does hover, make the salient point that tipping is probably "just too ingrained into our psyche." Maybe so.

I would get rid of restaurant tipping if I could. Elizabeth Gunnison Dunn of Esquire would go further and outlaw the practice. I oppose such coercive approaches. But I can't just unilaterally decide to opt out of the culture of tipping without being a cheapskate jerk. So I will continue to tip while hoping for more restaurants to go tip free.
Posted by Scott Hinrichs at 3/23/2015 09:40:00 AM