As the weeks passed following my wife's spinal surgery to close off the veinous fistula that was bleeding cerebrospinal fluid out of her central nervous system, her high pressure headaches abated. But then my wife once again began experiencing low pressure headaches. She didn't want to believe it at first.

One day after a few weeks of questioning whether she was really having CSF leak symptoms, I suggested that she take a caffeine pill to see what it did. She took the pill and soon experienced the same kind of relief she did before the surgery, as the caffeine caused vasoconstriction, increasing the fluid pressure in the central nervous system. She begrudgingly admitted that she must still be leaking CSF fluid.

My wife soon began once again working with the CSF Leak Expert Team at Cedars Sinai Hospital in Los Angeles, where she had previously been treated. After having yet another MRI done locally and then providing that image to the experts in Los Angeles, the team arranged for us to return to Cedars Sinai for another digital subtraction myelogram (DSM) and probable surgery. Having resolved a major leak on the left side of the spine, they suspected another leak on the right side that would require surgical treatment.

We drove to Las Vegas one day, stayed in a very nicely appointed Motel 6 away from all the glitz, and left early the following morning, arriving in Los Angeles around noon. We learned from our October 2019 trip that it's a really bad idea to drive from Las Vegas to Los Angeles on a Sunday afternoon/evening. Apparently more than a few Southern Californians go to Las Vegas for weekend getaways, resulting in very heavy traffic as they drive back home in time to get to work on Monday.

Mid February found us in a lovely Airbnb apartment just a couple of blocks from Cedars Sinai in West Hollywood. The weather was quite mild during our eight-day stay. We knew the routine well when we showed up for the DSM on a Monday morning. The DSM is a surgical procedure performed under general anesthesia, where they inject dye into the CSF fluid and do imaging to see where the dye goes. If they see something, they literally stop the patient's breathing for up to 90 seconds at a time to get the best image possible.

After a number of hours of pre-op and then the procedure, the imaging surgeon came to the waiting room to tell me that they had found no CSF leak. A spinal DSM can only be done on one side of the body at a time. While I was in post-op with my wife, Dr. Wouter Schievink, who is the head of the CSF leak program at Cedars Sinai came and chatted with us. Having found no leak on the right side, he suggested doing another DSM the following day to see if the left side had sprung another leak.


Tuesday was a repeat of Monday. Once again, when the imaging surgeon reported to me in the waiting room, he said that they found no leak on the left side. But he did say that they confirmed that October's surgery had been very successful. At first I was disappointed. But as I sat there waiting for the time when I could join my wife in post-op, it occurred to me that this likely meant that the leak was too small to see using available technology, small enough to be resolved by a spinal blood patch.

We were not surprised when Dr. Schievink visited us in post-op that Tuesday and recommended another double blood patch procedure. He suspected that the small hole from inserting the dye for the October DSM had failed to seal, although such holes usually seal on their own for most patients. If that was the case, the two new holes from the two DSMs that had just been done would likely present the same problem. From his experience, he felt that the blood patch procedure would most likely remedy all three holes with no problem.

A couple of days later, my wife was once again wheeled into the operating room for her third surgical procedure of the week using general anesthesia. My wife does not respond well to narcotics, but it is common practice for anesthesiologists to add narcotic to the IV of surgical patients receiving general anesthesia to mitigate surgical pain. Having already been quite nauseous twice that week, my wife prevailed on the anesthesiologist to omit the narcotic.

My wife was much more alert and happy when I joined her in post-op than she had been on all of her previous surgical procedures. But she soon found her back at the sites of the blood injections to be much more sore than she had imagined. Fortunately, over the counter extra strength Tylenol sufficed in managing that pain.

The next couple of days my wife experienced a mild high pressure headache, which was helped by drinking dandelion tea, as recommended by the experts at Cedars Sinai. Not wanting to cause any problems with the procedure, my wife carefully followed recommendations to avoid lifting, as well as bending and twisting of the spine. By the end of the weekend, however, my wife had no more headaches, no hearing disparity, and no mental fog. It was clear to her that all of her CSF leaks were gone. It felt like a tremendous miracle after a year and a half of suffering. 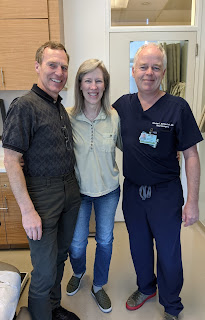 We had to stay the weekend so that we could meet with Dr. Schievink the following Monday. The idea was to allow the spine to settle before doing a final exam. By the time we were meeting with the surgeon, my wife was experiencing some pain and weakness in her lower back and down the backs of her legs. Dr. Schievink said that this is a very common side effect of the spinal blood patch procedure and that it would gradually resolve over the next 2-8 weeks. When my wife wondered why she had never had similar pain with previous blood patch procedures, the answer was that those blood patches had failed, while this one was working.

Several weeks have now passed since we returned home. My wife is still being very careful about lifting, twisting, and bending. She is following recommendations to gradually increase these activities over a 90-day period. So far, so good. She still has some mild pain in the backs of her legs, but it seems to be getting a little better with each passing day. It seems like a small price to pay to be rid of the CSF leak symptoms.

As we reflect on the journey that began with a severe nonstop headache in August 2018 and led to three trips to California, we feel very blessed. It has been expensive, but we have been blessed to be able to manage the expense. Last spring we were despondent about the unsuccessful treatment that my wife had received locally, the expense, and the seemingly endless requirement for various types of MRIs. We thought there was no solution and we grimly considered the possibility that my wife would suffer CSF leak symptoms for the rest of her life.

We had searched the internet for better information for months. But a chance series of links took us to the nonprofit CSF Leak Foundation. While watching their annual Leakweek online seminar, my wife found Dr. Schievink and his program at Cedars Sinai. It seemed like an impossible coincidence when I discovered that Dr. Schievink and Cedars Sinai were both preferred providers on our health insurance. What are the chances of that happening?

Today my wife is free of CSF leak symptoms and we hope she remains that way. Dr. Schievink asked us to visit him again in a year so that they can do some before/after comparison of my wife's brain scans, and consult about her case. So I may post a follow-up at that time.

While we are very grateful, we also know that there are a number of people out there suffering spontaneous CSF leak symptoms who either don't know what condition they have or else have no idea of how to find solutions. Since this is a rare disease, most doctors and neurologists know little or nothing about it or how to properly treat it. There are many people who feel hopeless, like we did before we discovered the CSF Leak Foundation.


If you know anyone hopelessly dealing with these issues, point them to the CSF Leak Foundation and/or the CSF Leak program at Cedars Sinai to explore whether they might find answers and perhaps complete healing. We are so happy it worked out that way for us.


Update 3/28/2020: Well, it was too good to last. My wife is once again experiencing CSF leak symptoms. The last blood patches were only temporarily effective. We are considering our options. So stand by for part 5 at some future point.
See part 5 for the next part of the story.
Posted by Scott Hinrichs at 3/13/2020 12:21:00 PM No comments: