Note: In Utah scones are deep fried bread. Other regions might refer to this dish as fry bread, elephant ears, sopapillas, etc. This isn't health food, but it is certainly delicious.

My siblings and I bounded out of bed at exactly 6 am, the earliest my parents would allow us to arise on Christmas morning. It took interminably long, maybe even 90 seconds, for the whole family to gather.

Our semi-chaotic tradition of opening the beautifully wrapped gifts that had appeared under the Christmas tree overnight began as soon as my parents gave the official nod. We were all spooked just a few minutes later when the front doorbell rang in the midst of our revelry. Who could be at the door at that time on Christmas morning?

It must have been quite a sight for our visitors to see my normally refined mom standing bleary-eyed at the door in her robe with several sparkly-eyed pajama-clad youngsters peering from behind. 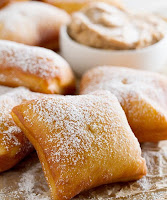 There stood Clark and Peg Rasmussen, a retired couple who lived around the corner. They presented a plate of hot scones with honey butter, bid us a merry Christmas, and quickly disappeared into the darkness. We couldn’t help taking a brief break from ripping wrapping paper to enjoy freshly fried bread slathered in deliciously sweet gooeyness.

When Mom asked us the next year what we wanted for breakfast on Christmas morning, several of us chimed “Hot scones!” in unison. We tried deep frying scones on Christmas morning for several years, but somehow our concoctions never approached the yumminess of the Rasmussens’ scones that one Christmas. We seemed to be missing some secret ingredient.

Years later I found out from another neighbor that the Rasmussens had no family nearby that Christmas. When they realized that all of their close family members would be out of town visiting other relatives, they decided that they needed to do more than just sit around alone on Christmas.

So that Christmas morning the Rasmussens arose at 2 am to make a large batch of dough and form it into bite sized balls. Then they kept watch on the neighborhood. As soon as they saw lights turn on at a house, they would fry enough scones for that family and deliver the piping hot treats to their surprised neighbors.

Each time I think about the Rasmussens I remember that plate of hot scones that they delivered to us that Christmas morning and I get a little better understanding of their special ingredient: the true spirit of Christmas. Generosity, selflessness, and love don’t appear on a recipe card, but I swear you can taste them.
Posted by Scott Hinrichs at 12/21/2018 03:03:00 PM No comments:

Forcing everyone to attend teacher school

As the mixed group of high school educators and parents of students seated themselves around the large table, a parent leaned toward one of the teachers and said, "My daughter loves you as an English teacher." "I'm flattered," the teacher responded. "Your daughter is a diligent student. She's a joy to teach."

I was stunned a few minutes later when the school's principal announced that 14 percent of the grades given during the first quarter of the year were F grades. Maybe I shouldn't have been surprised. A population of more than 2,000 students might be expected to approach a somewhat normal distribution of grades, so that we could expect about as many A grades as F grades, with the remaining grades clustering closer to average.

But that's not how high school grades work nowadays. Most parents and educators consider a C grade to be pretty awful. A study released in 2017 found that due to grade inflation 47 percent of high school students graduate "with A averages (including A-minus and A-plus)" (see 7/17/2017 Inside Higher Ed article), although SAT scores have declined. One critic quipped that A now stands for 'average.'

A recent PrepScholar blog post treats the issue of grade inflation quite thoroughly, even noting that there are both pros and cons to the issue. But grade inflation is not the focus of this post. The reality is that most of today's C– grades would have been F grades in the 1970s. So a C grade today is pretty awful. Thus, it's all the more shocking to hear that 14 percent of the grades given at this high school last quarter were F grades.

The principal and the teachers at the conference discussed the approaches they have been taking to try to remedy the problem. At least some of these efforts have been heroic. Part of the issue can be chalked up to attendance. Administration members try to visit with persistently truant students and their parents in their homes to structure some kind of program that might work for them.

I say that they try to visit because they are sometimes turned away, by the parents, no less. Some of these youth come from families with serious problems. Educators can't do much about that. Other students struggle with mental health issues that make school attendance impossible or nearly so.

Other efforts include opportunities during each week for students to visit with teachers in their classrooms for help. As we discussed the number and nature of students who are actually using these opportunities effectively, the aforementioned English teacher lamented, "I get many more of my A– students coming in than I do my D– students."

In a moment of sudden clarity I understood some of those D– and F students. For many of these youth, high school is too late to help them. Since their earliest days they have been classed as problematic and unworthy by a system in which they ill fit.

The entire system has communicated to these children in countless overt and subvert ways that they are bad. It's not that the system poorly fits their individual needs; it's that they are defective and bad for failing to fit well into a system that focuses heavily on a narrow band of factors that are easily measured.

By the time these youth arrive in high school they have already given up. Why bother to go talk to the teacher? I know this because I have have a son who gave up along in about fifth grade when his needs ill matched what the school was offering. He discovered that when he really tried to do the work, he simply failed with a higher score. So why put in any effort at all?

The A– students coming to the English teacher for help fit reasonably well in the academic system. High grades are their lingua franca. They have hope that by working with the teacher they can raise their grade from an A– to an A. The D– students have no such hope, nor do they value grades because they feel rejected by a system which seems to esteem grades above everything else (with the possible exception of competitive sports programs that draw crowds).

If you step back and look at our public education system, it is part child care and part teacher school. Isaac Morehouse writes, "The entire system, top to bottom, is designed by and for teachers. All the things learned and methods of learning are valuable nowhere in any part of the real world except in the academic professions." Some of Morehouse's wording seems hyperbolic here, but his main point is valid.

Morehouse goes on to explain, "The most effective learning happens just from being around things and being in an incentive structure that rewards certain behaviors. School means you spend all your time around educators (and none of it around any other real-world professions) and in an incentive system that rewards things they like. So that’s exactly what you learn; how to live like an academic."

To demonstrate the absurdity of our current academic-centric public school system, Morehouse likens it to "a world in which all kids were sent to auto mechanic school for the first few decades of life," despite the fact that the approaches used for most students would "bear no resemblance to what they’ll do for a career."

During the aforementioned meeting, I noticed that most educators and some parents present simply could not fathom why students would let academic opportunities slip by. Morehouse explained this phenomenon thus:

"It’s no surprise then that teachers and professors are baffled by people who complain about the fluorescently-lit hell of classroom-cramming and credential-chasing. They loved the whole experience, and it taught them all the stuff they needed to succeed in their careers as academics and educators. It’s also no surprise that it’s such an epic, colossal waste for most people who want to enter other parts of the vast job market."

Morehouse's criticisms of our public education system dovetail nicely with the work of Sir Ken Robinson. You might have seen Robinson's presentation in the most watched TED talk of all time or in his later TED talk about changing education paradigms.

As I looked around the table at the conference, I realized that everyone involved was stuck in a system that each of them is—and even all of them together are—pretty much powerless to change. The educators, while perhaps not blind to some deficiencies in the system, maintain their careers by wearing blinders that prevent them from seriously engaging Morehouse's criticisms. They must think inside of a box that protects the integrity of the system.

And while the number of students' parents dramatically dwarfs the number of workers in the system, their power against an institution that has successfully ingrained itself into the culture as a moral authority and a necessary part of life is so diffuse as to render them impotent to effect any real change.

It was frankly quite depressing. The educators are doing their best to respond to pressures from the vast education bureaucracy, politicians, and parents to produce superior outcomes, while oblivious to the fact that the product they offer is largely irrelevant to many students. The parents are augmenting the system, convinced that if their children don't excel in the system, they—both the students and the parents—will fail socially.

Not all teachers are oblivious. A friend who teaches early childhood grades recently fumed to me that the system focuses heavily on the limited developmental factors that can easily be measured, while increasingly ignoring difficult to measure characteristics that are equally or more important to balanced and happy living. She remains in her profession because she feels like it's her calling in life and she knows from experience that she can make a positive difference in many lives.

I'm not trying to bash educators. They have a tough job. But our public education system is dysfunctional. It ill fits the needs of students, except for those going into academic fields. Yet it's such a monstrously expansive and formidable entity that it withstands serious reform efforts and successfully thwarts potential alternatives.

I believe that meaningful change in the system can only really come about when enough parents realize that their children are in the academic equivalent of two decades of auto mechanic training, that they vote with their feet, withstand the social backlash, and find worthwhile ways for their children to learn skills pertinent to their individual needs. Only when enough people opt out will the system be forced to change.
Posted by Scott Hinrichs at 12/14/2018 03:26:00 PM No comments: