Our autistic son survives playing a feature role in a play

"This is nuts!" I exclaimed when my wife told me that our youngest son was going to try out for a part in the high school's autumn play, which is always a large scale musical. I was fully aware of how demanding rehearsals, performances, and everything else related to the play would be.

The longtime drama director at our local high school is an old friend of mine who is a very talented performer in his own right. He was very fun loving as a kid but he also had some organizational and leadership skills. The fun side is still there, but the business and leadership sides have become much more honed over time. The high quality performances he directs are partly a product of how demanding he is. Despite (because of?) how challenging it can be, hundreds of students try out for the school's plays year after year.

I have tried to be very supportive of my kids' extracurricular activities over the years. Practices, games, performances, ceremonies, and camp outs have been a large part of our life for more than two decades. But our youngest son is on the autism spectrum. Plus he deals with some mental health issues including major depression and extreme anxiety. In many ways he looks and acts like the "normal" teen he longs to be, but he has some notable differences and limitations.

Included in our son's life package is the fact that he simply has far less bandwidth than does his typical peer. While our son is very bright, his cognitive in-processing takes longer and requires much more effort. This exacts a mental and physical toll that, coupled with his mental and emotional health issues, leaves less of him to go around than he would like.

Thus, I simply couldn't see how our son could manage the rigors of being in the high school play. I could see this working out like many other endeavors where he has run out of steam and has been unable to fulfill commitments.

I understand this on a personal level. Years ago after my first major Multiple Sclerosis attack, I struggled to come to grips with and understand the boundaries of my capacities. Christine Miserandino captures this conundrum very well with her Spoon Theory.

Every day each of us has a certain allotment of physical, mental, and emotional capacities; our budget for what we can do and handle that day. While our budgets change from day to day, those with chronic illness tend to have a smaller budget than the typical person. When your budget is tight you have to learn to be frugal, lest you overspend and shut down. Sometimes you can borrow from tomorrow, but too much of this can result in a hard crash.

It has taken me years to learn how to do a decent job of managing my daily allotment of capacities. Even after all this time I occasionally miscalculate and suffer the consequences. Our teen son is still developing and learning. Sometimes he optimistically commits to future demands on a day when his budget is in good shape, only to discover when payment is due that the balance in his physical/mental/emotional account is insufficient.

That's what I could see happening with the high school play. Maybe reliability wouldn't be much of a problem if he were in the ensemble. But he sought for and landed the part of the preacher in Seven Brides for Seven Brothers. He figured that this role was a minor speaking part that probably didn't require a lot of dancing (it still did) and that wouldn't be as demanding as the major speaking parts (it wasn't). Besides, he figured that hardly anyone would think to apply for that role. His natural Asperger's stiffness also seemed to lend itself well to the role.

At first things went well, despite many days of long rehearsals after school. At one point our son began to realize that the overall toll on him might be too high but he opted to stick it out. About a week and a half from the opening show, our son hit a wall. Just as when the typical kid gets sick and can't go to school, he just couldn't manage school. He essentially shut down for a couple of days. He was ready to quit the play, despite the disruption this would cause.

My wife and I realized that if our son could make it through the run of the play he would feel a great sense of fulfillment. But it was not clear whether it would be good to push the matter. After counseling with our son, his adviser, and his drama teacher, we eventually arrived at a compromise. Some school pressures were temporarily eased and the drama teacher appointed an understudy who would cover the preacher role for half of the performances.

Matters were still somewhat tenuous as this plan was put into place, but things got better after the long weeks of rehearsal came to an end and the play performances began. Our son did very well as the preacher in the play. As we had hoped, our son came out of the final performance feeling victorious. He had a sense of fulfillment from having been part of a grand, high quality production. But he was also very glad that the play was over. 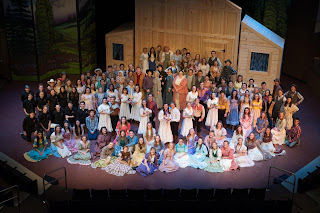 We are pretty happy with this outcome from a parental perspective. We are grateful to our son's teachers for their flexibility and to our son's understudy who came up to speed on the part in short order. We are especially grateful to the drama director for going beyond the call of duty during a very busy and highly stressful time to make this experience work well for our son. There are a number of situations that will need to be managed between now and graduation for our son, but it's great for him to have this victory under his belt.
Posted by Scott Hinrichs at 11/17/2017 12:24:00 PM No comments: