Fishing with Dad: the time I caught no fish all week and was glad

I was about nine or ten years old when Dad took a week of vacation one summer and took my three brothers and me up to Pineview Reservoir to go fishing for a few hours on a daily basis. (My youngest brother was yet to be born.) Mom wasn't able to take vacation from work that week, so this was a way for Dad to enjoy a staycation with his sons. As I recall, we had gone on a bigger ticket vacation the previous summer and my folks were saving for another major event down the road, so this was a way to vacation on a budget. 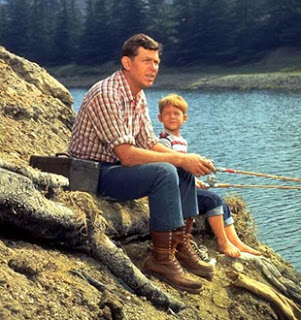 Fishing is not fun for me, but this daily excursion still turned out to be a memorable experience.

Each day we would arise much earlier than a kid wants to get up during the summer months, eat a quick breakfast, grab our gear, and head up to the reservoir. I was terrible at preparing my fishing line. I didn't know how to tie knots, couldn't bait a hook or attach a lure, didn't understand how the plastic bubble worked, etc.

The most likely reason I didn't understand these things was that I didn't care about them. I have a brother-in-law who is an avid fisherman. He fishes year round, multiple days each week. He knows all about fish behavior and how to entice the right kinds of fish under the right conditions using his hand-tied flies. But I simply can't bring myself to care about any of that stuff. The entire activity is mind-numbingly boring for me.

Back during our staycation, after the seemingly endless time it took to get my pole and line ready, I would plunk my hook into the water and hope that I would not catch a fish. Because if I caught a fish I would actually have to touch the thing. Yuck! Maybe five minutes into the interminable waiting for a fish to steal my bait, I would be goofing off doing something other than fishing.

It was during one of these many goof off sessions that I learned that other fishers didn't take kindly to some stupid kid awkwardly trying to skim rocks across the surface of the water where they were fishing. It turns out that chucking rocks in the water tends to scare the fish away. And unlike me, some of these people actually did want to catch fish. Go figure.

Dad loved his sons. But he was not very patient with kids who didn't quickly demonstrate proficiency in anything that came easily to him. We used to hate it when Mom would send us outside to help Dad with a task he was doing in the yard or on the outside of the house. Dad couldn't understand the necessity of baby steps and instructions for any process that seemed self-evident to him. Nor could he understand that mistakes were a natural part of teaching a kid how to do a task.

Actually, Dad didn't seem to grasp that teaching a kid was of any value whatsoever when there was a task to be finished. The task always took precedence. So Dad often ended up doing these things by himself. He excelled at thinking deeply and getting stuff done; not so much at teaching. Sometimes when my deeply philosophical dad would try to teach us, the content would cruise so far above our heads that our eyes would glaze over, seemingly for hours.

When my parents had young grandchildren, I saw Dad get down on the floor and horse around with them in a silly manner. It was only then that I remembered Dad doing the same thing with us when we were young. The childish goofiness each of us shared with Dad ceased about the time we started elementary school. Then Dad expected us to step up and act responsibly, as he had been required to do at that age, growing up in Nazi Germany.

Once we were no longer small, Dad exuded the persona of a northern German stoic. But there were times something more whimsical would break through his staid surface. One of my favorites was when Dad spilled his milk at the dinner table one evening. Kids spilling drinks at the table was one of Dad's pet peeves, because the liquid was bound to drip onto the new dining room carpet.

This carpet was avocado green colored deep shag that was all the rage in the early 70s. It looked horrid when it was in optimal condition, so it is hard to see how a little bit of milk would make it worse. 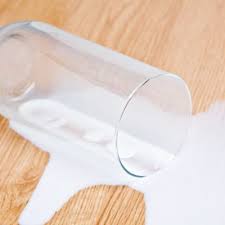 Still, when Dad spilled his milk, we all watched as the liquid quickly spread toward the leaf seam in the table. Dad cast about for anything close and ample enough to blot the spill before it reached the critical spot. The only thing he could see was my brother's fresh sandwich. He grabbed it and mopped up enough of the spill to save the day, giving Mom enough time to jump up and grab a towel, which she used to mop up the rest of the spill.

The interplay was beyond hilarious for us kids. Well, except for my brother, who was deeply offended that his sandwich had been used as a mop cloth. Mom quickly replaced it with a fresh sandwich. The irony of Dad enacting his own pet peeve was not lost on him. He couldn't help laughing out loud about it, which was something we rarely saw in those days.

Dad has been gone for 13 years now. His last couple of years of life were marked by declining physical and mental health. It was painful to watch my intelligent, learned, analytical, serious, hard-working, spiritual father deteriorate until his comatose, emaciated mortal form stopped sustaining life.

I am still left with a lifetime of memories of Dad; some good and some bad, but good overall. Among those memories is the summer we went fishing every day for a week. I'm still glad that I never caught any fish during those trips. I didn't like fishing then and I still don't like it. But I like the memory of that week with Dad and my brothers, as well as many other memories that evoke a mixture of feelings, weaving a rich tapestry of love that I know will endure beyond this mortal sphere.