Grateful for My Broken Vessels 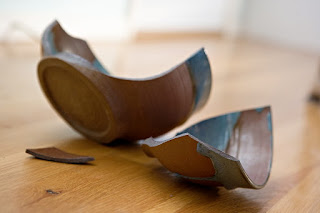 Until a few years ago I was relatively unfamiliar with mental illness issues. I knew of people, including extended family members that had mental health problems. But none of these touched me closely. Like most people, I developed opinions that were based in faulty information and media tidbits.

Little did I know that some of my children grappled with mental illness. As their issues became more clear I was forced to become more educated about the mental illnesses that impact our family.

I grew up in an era when mental illness carried a strong stigma. It seemed to mainly be seen as a moral failing and was regarded in a similar light as an alcoholic that got liver disease or a smoker that got lung cancer. The level of compassion required was less than was customary for someone that developed an apparently undeserved health problem. Mental illness was seen as a lack of sufficient fortitude.

Besides, mental illness is scary because it is poorly understood. Many harbor fears of the mentally ill because they don't know how to act around them. The rare and highly publicized cases where a mentally ill person acts out in violent ways reinforce the idea of crazy people as depraved monsters.

Fortunately, I think that society is making some progress in understanding mental illness. In October 2013 Elder Jeffrey R. Holland of the LDS Church's Quorum of the Twelve Apostles gave a landmark speech titled Like a Broken Vessel, a term taken from Psalm 31:12. He urged compassion, understanding, and professional treatment, in addition to spiritual approaches.

A few months ago the Church released a video about mental illness that includes portions of an interview with Elder Holland. The video is nearly 12 minutes long, but it's worth watching.


The Church has also released the mentalhealth.lds.org website that includes resources to aid in understanding and dealing with mental health issues. The site includes videos of people that have mental illness telling their own stories. These people expose their own vulnerabilities in very personal and poignant ways in the hope that they can help someone else.

One of our adult sons has had depression his entire life, although, we didn't grasp that fact until a few years ago. He has also had episodes of major anxiety. After working regularly with psychologists for several years, his therapist judged that it was time to augment with psychiatric treatment. Getting our son into a local psychiatrist that takes his insurance has been nightmarishly difficult. Meanwhile, depression takes its toll, much like an inadequately treated cancer.

It took years for us to understand that another son (now a teen) has Asperger Syndrome, an Autism spectrum disorder. This is coupled with major depression and general anxiety, which literally measures off the charts in some aspects. While he's very smart, his ability to handle academic tasks (always a challenge) has significantly declined over the past year, resulting in a constant state of scholastic crisis.

Each of these sons regularly experiences clinical levels of hopelessness, helplessness, self-doubt, self-loathing, fear of the future, and everything else that goes with their respective conditions. Telling them to cheer up or to have more hope is like telling someone with Type I Diabetes to stop having Diabetes. Their conditions are complex so solutions aren't simple.

Yet another son developed chronic pain syndrome about nine years ago following a bout with walking pneumonia. Severe pain is his constant companion. It has seriously impacted his life. Strong prescription painkillers don't help much, so he only uses them about twice per week just to take the edge off when he needs to concentrate. (He's finishing a degree in nuclear physics.)

Doctors haven't helped much either. A while ago our son re-posted something that another chronic pain sufferer wrote:


going to the doctor when you’re chronically ill is weird.

It’s like imagine everything in your house is on fire, and you’re standing there and the fire department come in like, describe the fire to me and maybe we can find what caused it and put it out.

also the fire in the couch is really inconvenient

occasionally the fire guy is like, well your tv is on fire so it might be electronic-fireitus but that would cause other things like fire in the dvd player

and you’re like, oh yes. that’s been on fire for years. I forgot to mention it because it’s always been a relatively small fire. It’s right next to the bookshelf which has much more fire.

and then the fire guy is like, oh. I wouldn’t worry about that. book shelf fire just happens sometimes.

From what we've garnered from medical professionals and myriad resources (of variable quality) on the internet, our son's chronic pain is really a mental health problem. (i.e. "It's all in your head, boy.") He has some indicators that could cause minor pain at the sites where he experiences pain, but nothing that would cause major pain. Somehow his brain picks up the signals and amplifies them. The pain is very real; it's not imaginary. Finding anything that really helps has been elusive.

Our children's various mental health issues impose on the family in a variety of ways. Their challenges are inconvenient and expensive. They require time, focus, and energy that could be put to other uses. All of us would rather not have to deal with these problems.

It's easy to think like that. But one recent evening my wife and I thought back to our first few married years. We were childless and weren't sure we could have children. For reasons I won't go into here, adoption was not a realistic possibility for us. After years of fasting, praying, and seeking medical help, I had a spiritual experience that let me know that we would have four sons and a daughter. My wife eventually felt the same way.

Although we moved forward in faith, our children didn't come easily. Each child came only after much fasting, prayer, medical help, and following proven patterns for achieving pregnancy. We immediately loved each unique child born to us. And although each has brought us a fair share of challenges, we still deeply love each child and willingly accept the package that comes with each.

Some of our children may be "like a broken vessel" at times, but we still see each child as a cherished gift from God; a gift for which we are now and will forever be eternally grateful.
Posted by Scott Hinrichs at 11/23/2016 11:52:00 AM No comments: