We testify of Christ

Years ago when we had only three children, I was unable to attend church one Sunday, so my wife took the three children to church by herself. It happened to be our monthly fast Sunday. (See Fast Sunday topic for explanation.)

In Latter-day Saint congregations, the fast Sunday sacrament meeting program consists of congregation members voluntarily expressing extemporaneous testimony. This format is not without its challenges. It's like open mic Sunday. Congregation leaders have little control over who decides to speak, how long they speak, or what they say.

Most active Latter-day Saints can likely cite a few quirky, strange, awkward, or inappropriate testimony speeches. But most church members sense that a certain spirit of sacredness should pervade the meeting, so there are probably fewer of these unfortunate events than one might expect.

Back to that Sunday years ago. When the baby needed to be fed, my wife retreated to the mother's lounge for some privacy. Our six- and four-year-old boys seemed to be managing just fine with coloring books and they promised they would be good. 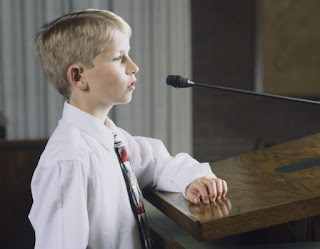 As my wife listened to the testimonies being voiced over the speaker in the mother's lounge, she was surprised to hear the familiar voice of our oldest son. That day our normally introverted son spoke about many things in a manner that I am told was quite entertaining. Unfortunately, few of these things had anything to do with the gospel of Jesus Christ.

My wife couldn't stop feeding the baby and run to the chapel. She thought that surely our son would quickly button up his verbal stream of consciousness because he had never been much for public speaking.

That was not the case this time around. My wife sat increasingly mortified as the minutes passed. Our son talked about the tack strips that were exposed in the dining area after the old carpet was removed and before the new carpet was installed, among many other topics of that nature. Surely a member of the bishopric would put a stop to our son's rambling. Or maybe another mom would kindly step in. But nobody did.

Our son finally ran out of things to say after seven long minutes. In the weeks following this event, numerous congregation members told me how entertained they were by our son's extemporaneous speech. But entertainment is not the goal of testimony meeting.

Following this event, we decided that we would hold our own monthly family testimony meeting. During one weekly family home evening each month, a family member would conduct the meeting and invite family members to present their testimonies. The individual conducting would first repeat what has become a mantra in our family:

As a reminder, a testimony in the church is what you know or believe to be true about Heavenly Father, Jesus Christ, Their church, their workings in our lives or in the lives of others.

The foundation of a testimony is the knowledge that Heavenly Father lives and loves His children; that Jesus Christ lives, that He is the Son of God, and that He carried out the infinite Atonement; that Joseph Smith is the prophet of God who was called to restore the gospel; that The Church of Jesus Christ of Latter-day Saints is the Savior’s true Church on the earth; and that the Church is led by a living prophet today. With this foundation, a testimony grows to include all principles of the gospel.

A testimony in the church may include any element of the gospel, but it must be founded on the basic doctrines of the gospel. Without this foundation, testimonies of peripheral matters are like branches severed from the trunk of the tree, or from the "true vine" (John 15:1, 1 Nephi 15:15). Without a witness of Heavenly Father and Jesus Christ, and their true work among their children on earth, testimonies of incidental doctrines become secular pronouncements devoid of true spiritual power.

I recently attended a fast and testimony meeting at a Scout camp. The meeting was conducted by an authorized chaplain of The Church of Jesus Christ of Latter-day Saints in conjunction with the administration of the sacrament, so it was an official church meeting. I was deeply disappointed in some of the extemporaneous speeches that were presented. One individual testified of the importance of doing daily acts of personal maintenance. Another testified of the value of hard work. Others spoke of the value of friendship, service, the great program at the camp, standing for what is right, etc.

All of these are good things, but most speakers seemed to shy away from testifying of Jesus Christ and of the Father's great plan of happiness. Some didn't even bother to close their speeches in the name of the Savior, perhaps sensing within themselves the lack of connection between their words and the Divine Son of God.

Why do we close testimonies, talks, lessons, and prayers in the church in the name of Jesus Christ anyway? For starters, because the Lord has commanded it (Moses 5:8, 3 Nephi 27:5-7, D&C 1:20). But isn't it a bit presumptuous to claim to speak in the name of the Lord? After all, anyone who has been in the church for long enough has heard plenty of nonsense uttered before a speaker has closed in the Savior's name.

It is understandable that some might feel uncomfortable presuming to speak for Jesus Christ, yet the Lord himself says that his goal is "that every man might speak in the name of God the Lord, even the Savior of the world" (D&C 1:20). But isn't that at some future point when we are perfected?

CS Lewis wrote something that still bothers many Christians: "Every Christian is to become a little Christ. The whole purpose of becoming a Christian is simply nothing else." He likens our efforts to act like the Savior to a child play-acting a grown up role, something children do quite often. Researchers have found that this play-acting is a very important part of growing up to be a functional adult.

Lewis posits that when we pray or speak in the name of Jesus Christ, we are play-acting at being Christ. We know even while in the throes of doing so that we are not Christ and that we are very unlike him in many ways, just as the child playing an adult role knows that in many ways she is very unlike the role she is playing at the moment.

Many Christians are well and good with becoming more Christlike, but they draw the line at actually becoming like Christ. That is tantamount to blasphemy in their eyes, although John teaches that disciples will ultimately meet Christ and see that they have become like him (1 John 3:2-3). If the Christian's job is to become like Christ, it is unclear from the scriptures where or why that effort should be halted. Latter-day Saints should fully embrace the quest to receive the Savior so completely that he eventually makes us equal to him.

Members of The Church of Jesus Christ of Latter-day Saints have been repeatedly called upon by modern prophets to make Jesus Christ the center of every facet of their lives. We are supposed to be obsessive about following Christ. We should talk of, rejoice in, preach of, and even prophesy of Jesus Christ (2 Nephi 25:25-26). How sad it is that some members of Christ's church struggle to mention the Savior in a meeting devoted to bearing witness of him.

"I feel moved to participate in the testimony meeting," one might say, "but I do not at present feel particularly close to Jesus Christ. In fact, I'm not sure how much I believe in the church and its spiritual claims anymore." Is the answer for someone who feels this way to keep their mouth shut in testimony meeting?

Perhaps the experience of a friend of mine can be instructive. The first time Ron bore witness of Jesus Christ, his church, and his prophets, was at a sacrament meeting just prior to Ron leaving on a two-year mission for the church. As Ron testified that he believed these truths, he was suddenly filled with the Holy Spirit and he knew that the words he was saying were true. His fledgling witness came as he exercised a particle of faith (Alma 32:27). He has spent a lifetime cultivating his faith so that he now has a vibrant burning witness within his soul.

The primary purpose of a testimony meeting in the restored Church of Jesus Christ is to bear witness of the Savior. If you can say something that helps fulfill that purpose, go ahead and say it. It seems to me that the Lord is very compassionate toward those who make earnest efforts to follow him, no matter how clumsy they might seem.

If you can't currently even express belief in Christ, perhaps it would be best for you to first spend some time building your faith by play-acting like Christ in your thoughts and actions more often. CS Lewis promises that as you do this, the Savior will work with you to re-create you in his image, "killing off the old natural self in you and replacing it with the kind of self He has. At first, only for moments. Then for longer periods. Finally, if all goes well, turning you permanently into a different sort of thing; into a new little Christ, a being which, in its own small way, has the same kind of life as God; which shares in His power, joy, knowledge and eternity." (Mere Christianity, 1996 edition, p. 165)

We still laugh about the time our oldest son rambled at a testimony meeting as a young child. He was just doing what he perceived others doing according to his six-year-old understanding. Some of our adult children have pursued other paths than a fully active Latter-day Saint lifestyle. But if you ask any of them what a testimony in the church is, each one still knows the answer.