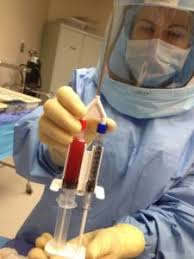 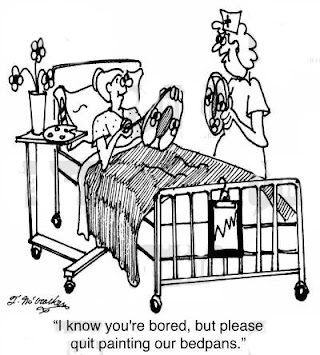 It wasn't long before we said our goodbyes as my wife went to pre-op with a nurse and I walked back to our Airbnb apartment to spend the day working. I received some texts from the surgery team notifying me of how things were going. Eventually I received a text from my wife telling me that she wished I was with her in post-op, because she was terribly bored. Cedars Sinai requires patients who have had an epidural procedure to lie still for four hours in post-op. Our local hospital required only one hour.
Eventually it was time to pick my wife up. I drove into the pickup lane in the hospital's parking garage and waited a good 15 minutes before they brought her to the parking garage in a wheelchair. We were soon back in our Airbnb apartment, where my wife was required to rest and avoid bending her spine for two days. More boredom. We don't do much TV watching, so that kind of thing grows old, even with access to various streaming services.
On this particular trip, we got up very early one morning and drove straight through to LA from our home, stopping for food, gas, and potty breaks. We did the same thing on the way home. Leaving LA at 5 am during the pandemic made for the lightest traffic I have ever experienced in the area. We made record time.
Despite carefully following post operative instructions and being extra careful with her spine, within a couple of weeks my wife once again began experiencing CSF leak symptoms. The CS expert team has determined that another round of DSMs will be needed. They will apparently look at parts of the spine that have not been scanned in previous imaging, mainly because they almost never find leaks in those regions. The team hopes to discover one or more leak sources so that they have a clear idea of where to do surgery, instead of just working on what appear to be the most egregious perineural cysts.
We would like to hope that our upcoming trip to Cedars Sinai in a few weeks will be our last trip for surgical treatment at the facility. But it probably won't be. We still feel like we're on the right track. It seems that sticking with the expert team at CS is our best hope for achieving a permanent resolution to my wife's CSF leak problems. I will report outcomes in a future post.
See part 6 for the continuing saga.
Posted by Scott Hinrichs at 8/04/2020 11:25:00 AM No comments: