Giving thanks, seeing, and serving

I always enjoyed nostalgia and tradition as a kid. One Thanksgiving morning when I was about 10, the local LDS Institute of Religion presented a nostalgic musical devotional program at a nearby church. Our family got dressed in church clothes and attended the event, probably because Dad was in a church leadership position and leaders were encouraged to support the event.

That pressure must have diminished by the following year. But by then I had a nostalgic spot in my heart from the year before that said this was now a family tradition. When I excitedly suggested that we go to the program that year, my family (even my parents) responded with little enthusiasm. I think I guilted them into it, because we went. But that was the end of that Thanksgiving tradition. Most family members preferred to ease into the day while Mom preferred to work in the kitchen preparing a feast fit for royalty. 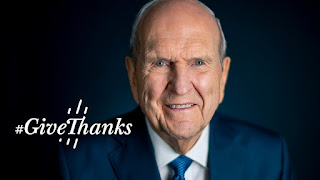 As I have participated in the #GiveThanks social media initiative over this past week, as requested by President Russell M. Nelson, I have found myself hoping that, unlike the Thanksgiving devotional of years ago, this gratitude activity becomes an annual social media tradition that sticks around for years to come.

For months leading up to last Friday, my social media feeds have been filled with anger, divisiveness, fear, politics, misinformation, nastiness, etc. That suddenly all turned around after President Nelson's message was released. For the past week my feeds have been filled with expressions of gratitude and content that is virtuous, lovely, of good report, praiseworthy (Article of Faith 13), and generally uplifting.

The change has been almost magical. I have found myself scrolling along with a big goofy grin on my face and occasional tears in my eyes. (See this Meridian Magazine article for examples of both.) It isn't lost on me that I have been blessed throughout my life in outsized ways and that there are many people who are struggling in ways that make it extremely difficult for them to express thanks at this season. Some might find looking at others' expressions of gratitude very painful as they compare their own situations.

President Nelson is correct when he talks about the healing power of gratitude. It is scientifically proven to help, regardless of the situation in which we find ourselves. It won't heal all of our problems, but it will make life better.

Saying that to people who are desperate straits, however, can be like telling someone grappling with clinical depression to just be happier. Disciples of Christ have covenanted to "mourn with those that mourn" and to "comfort those that stand in need of comfort" (Mosiah 18:9). As we express gratitude, it might be good to look for ways to mourn with and comfort those who are struggling right now, especially those on the margins of society. 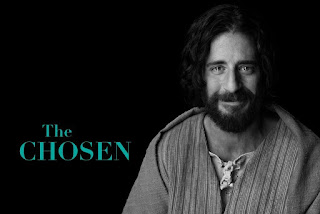 A few weeks ago, we binge watched season 1 of The Chosen. We had seen all of the episodes before but this time I noticed a number of things that had previously escaped my attention. In one scene, Nicodemus is admiring a relative's love for the story of Hagar, wife of Abraham. Hagar find herself caught up in something complex over which she has no control. Fleeing from abuse, an angel of the Lord comes to her and in essence says in the name of the Lord, "I see you. I see what you are going through. You will be blessed" (see Genesis 16).

Later in the series, after Simon Peter and his brother Andrew have quit fishing to travel around the countryside with Jesus, the Savior visits the home of Simon Peter. In a private moment, Jesus turns to the wife of Simon Peter and says, "I see you." He explains that he sees what she is experiencing and he knows it isn't easy for her to deal with her husband's sudden change of profession.

We may not be able to perform healing miracles as Jesus does in this instance in the series, but we can do something. Sometimes just listening or being there for someone can help. Still, we can't do anything until we see those who are struggling.

Years ago I was hospitalized for a week and a half while suffering my first major Multiple Sclerosis attack. A week and a half may not seem very long, but I assure you that it seemed like forever. We had no idea where this would lead or what life would be like for us. Those who saw my plight and reached out in any fashion were a lifeline through those difficult days.

More than three decades later, I still get choked up as I think about those who visited, those who sent cards, those who helped with yardwork while I was laid up, those who donated leave at work so that I could continue to have a paycheck during the many weeks I couldn't work, and those who simply prayed for us. These acts helped me feel valued, helped me hang on, and helped me find ways to keep plodding ahead when I wasn't sure there was light at the end of the tunnel.

So while I have endless reasons to #GiveThanks this Thanksgiving, I hope that I will put that gratitude into action to see and serve someone who is struggling. There are ample opportunities all around us.