We have all been exposed throughout our lives to various versions of the hand wringing worry that the usage of proper English is dying. British commentator Oliver Kamm wants us to get over what he calls "grammar pedantry." He goes so far as to argue in this WSJ article that proper English (as defined by pedants) doesn't actually exist.

Language usage has never been successfully pushed from the top down. It bubbles up from its users. Kamm writes, "Usage is not just usage: It is what the language is." The whole point of language is to communicate well with one's intended audience. Different people use language differently, depending on place, time, audience, etc.

Regional dialects often fill this role quite effectively. The language used in private to communicate with close confidants naturally differs from the language used to address a formal audience. And even that will differ depending on whether that audience is filled with nuclear physicists or gourmet chefs. This is all just fine.

You actually can make grammar mistakes that make you appear stupid to others. But those mistakes usually have nothing to do with the rules promoted by pedants. Kamm says:


"It is possible, of course, for us to make errors of grammar, spelling or punctuation. But it is not possible for everyone, or the majority of educated users of the language, to be wrong on the same point at the same time. If it is in general use, then that is what the language is."

Those who get pedantic about supposed violations of linguistic rules usually want to work it from the wrong direction, forcing rules from the top down. Kamm criticizes this effort thus, "The grammatical rules invoked by pedants aren’t real rules of grammar at all. They are, at best, just stylistic conventions...."

"If someone tells you that you “can’t” write something," advises Kamm, "ask them why not. Rarely will they have an answer that makes grammatical sense; it is probably just a superstition that they have carried around with them for years."

Many such rules were derived from self-help books published in the 18th and 19th Centuries that were designed to help members of "an emerging merchant class" communicate effectively in "the dialect that grew up in and around London." Most people that insist on shoving these rules down others' throats have no idea where the rules came from or why anyone today should follow them.


Real language scholars, on the other hand, figure out what the rules are by studying how most people actually use the language. "Whatever is in general use in a language (not any use, but general use) is for that reason grammatically correct."

This effort is ongoing because language usage is in constant flux. I have seen reprints of articles written just three decades ago that add a notation saying that spelling, grammar, and punctuation have been modernized. In general, as I wrote in January, we are moving toward language simplification and clearer communication. We should be used to this paradigm of change.

Kamm isn't the only one blasting away at faulty English 'rules.' TheMuse lists five dumb rules that can be dumped. Here's a list of 10. You can Google for more. Even Wikipedia lists a number of misconceptions about English rules, saying that many of these have simply been invented by teachers and textbook writers. 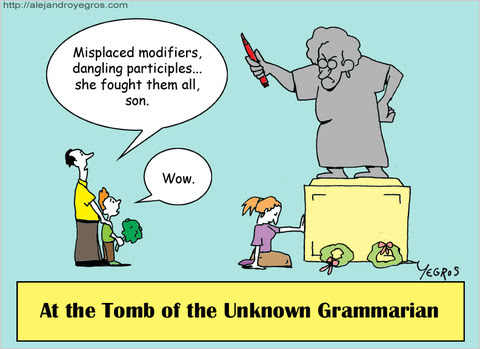 The teaching of English should not revolve around what supposed gatekeepers of proper English think it ought to be. Kamm says that people "certainly should not have stupid, made-up linguistic superstitions drilled into their heads." Rather, English instruction should focus on how the language is actually used. Students should also be taught about the need to keep abreast of changes, as language usage will definitely evolve over their lifetimes.