As a child I remember watching Bro. B in the ward clerk office typing up the weekly tithes and offerings reports on triplicate forms that used carbon paper. He was meticulous about destroying the discarded carbon paper because data could easily be read from those flimsy black sheets.

My turn came when I was called to serve as assistant ward clerk over finance in my young adult ward. By then we had modern typewriters that used an OCR font, but could also output other fonts. The triplicate forms we used were on carbonless NCR paper. But any mistake meant retyping the whole report.

By the time I was called to serve as a counselor in a bishopric, our ward clerk used an archaic DOS based text screen system for entering donation data. I quickly became the backup guy because I had experience in banking, accounting, and software development.

While serving in the bishopric we were upgraded to a GUI fat client called MLS (Member and Leader Services). It was slow and we still had to use a dial-up connection to transmit data to Church headquarters. But it was light years ahead of the system it replaced. It took years for data transfers to move to the internet. Actually, our local church building got internet capabilities a couple of years ago.

The Church has not always been quick to adopt new technologies. You wouldn't know by today's copious online resources that the Church was very cautious about developing a presence on the internet. The Church's first rudimentary site had only a handful of pages. I know from an inside source that every single word and image on every single page had to be personally approved by a member of the Quorum of the Twelve in the early days.

Back to the finance topic. Members of the Church of Jesus Christ of Latter-day Saints are commanded to pay a tithe, ten percent of their annual "increase." They are also admonished to pay other offerings, including a monthly fast offering equal to at least the amount of two meals not eaten during the fast. These funds are used to help the poor. A variety of proselyting, temple, and humanitarian donation categories are also available.

For most faithful church members in North America, paying church donations means cutting a check and filling out a donation slip by hand. Those slips are then manually transcribed into MLS by clerks, who also reconcile and account for donated funds, and then deposit the funds at a bank.

This system seems perfectly normal to most people over 50. But for those that have grown up making most payments electronically, it seems like the dark ages. Tevya Washburn reports on his Mormon Life Hacker site that the Church is running an online donation payment pilot in some stakes. Washburn even has a screen shot. 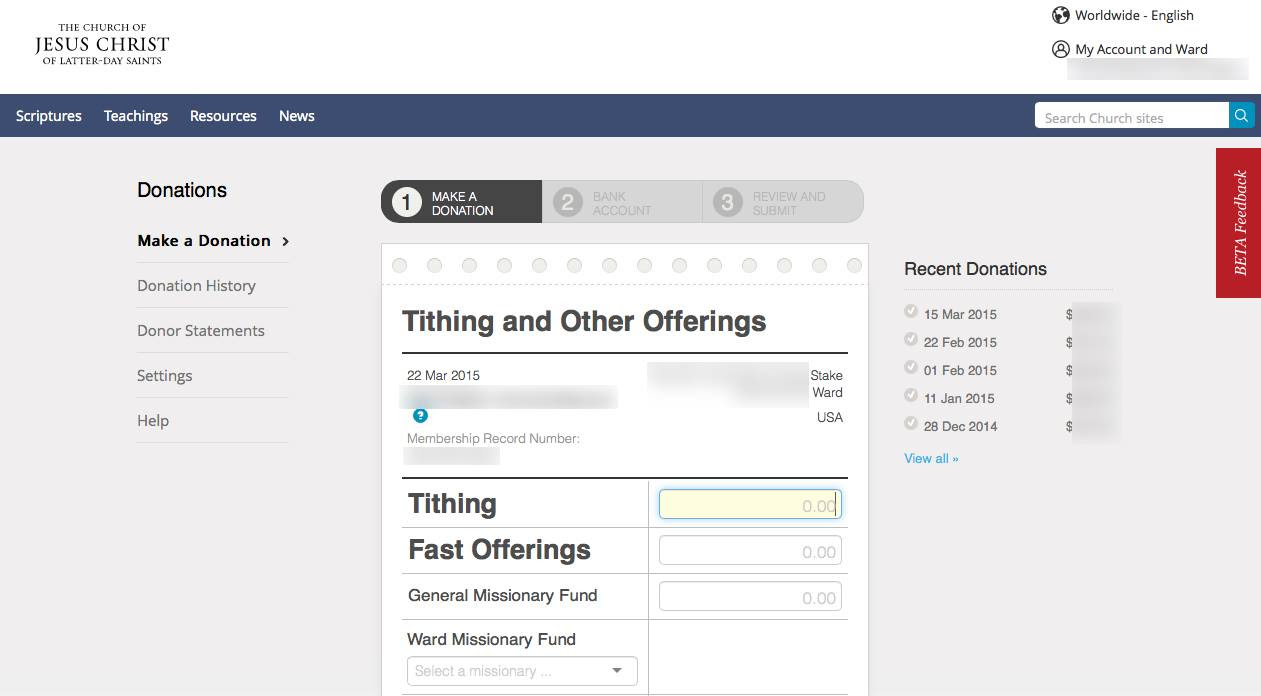 The system appears quite simple. The interface looks like the current donation slip. You have to link up a bank account. I doubt the Church will ever allow credit card payments. It seems like it would be antithetical to gospel teachings to use debt to pay tithes and offerings. But I wonder if the Church will ever accept something like PayPal payments. Maybe not, because I doubt the recipient can tell whether the PayPal source is a bank account or a credit card.

It would seem that the online donation system would simply offer another method for paying tithes and offerings. I suppose the standard system will continue to be available for many years into the future. At the very least, children that have no bank account will still need an avenue for their donations. But I don't foresee anyone being forced to use the online system. So everyone ought to be happy.

I look forward to the day that the Church's online donation system becomes more generally available. It will simplify life for many donors as well as for clerks and bishopric members.
Posted by Scott Hinrichs at 3/26/2015 05:09:00 PM

Hi Scott, I've read your blog for years after looking up info on Camp Loll.

I was involved in the development of this online payment system and since it has been opened to a few stakes, I can provide a few details.

It will most likely be available to everyone sometime this year, if not by the next quarter. The beta test has been extremely successful.

All private info is retained by Zions Bank, which has the resources and compliance structure in place to mitigate identity theft.

Once a user sets up a default bank account, paying tithing is quick and easy. It would take no more than one minute of your time to initiate the payment from beginning to end at any time of the day. The Church records your payment on your record the same way as if the ward clerk had done it himself.

It has been so wonderful to see this system created and go live during the beta test. I sincerely hope that its availability will help members(and non-members alike) increase charitable donations because of how easy it will be to do so.

Jim, thanks for the info. People that aren't tech savvy won't care much about paying tithes and offerings online. But to me this is wonderful news. And that's just from a tithe payer point of view.

Having been a ward and a stake finance clerk, this seems like a great way to reduce human error and to thwart the potential that exists for theft/fraud anytime imperfect people are tasked with dealing with money that isn't their own.

Thanks for the article. It's interesting to see the evolution of the Church's recordkeeping over time.

The Church does use credit cards – for example, missionaries use Church-issued credit cards – and hasn't ever taken a position against them (though there is some good counsel available on LDS.org about using them wisely). I bet you'd be able to pay tithing and fast offerings with credit cards.

Actually, according to the help file, neither debit nor credit cards apply – it's set up as an electronic funds transfer:
https://www.lds.org/help/support/finance/online-donations?lang=eng

It's official. Online payments for tithes and offerings are rolling out "out to congregations in the U.S. throughout 2015 and the Church will notify local leaders when it becomes available in their area." See this LDS news release for details.