We chose a nearby buffet because my son was famished, having missed breakfast that morning. One of the advantages to a buffet is that everyone can get something to eat right away. There's no looking at menus, waiting for someone to take your order, etc. You just grab a plate, put some food on it, sit down, and start eating.

Actually, I noticed that many diners didn't wait to get back to their seats before sampling the fare. At a buffet it's no problem if you end up picking something you don't like. Just leave it and someone will eventually come by and whisk it away while you go back for more food.

Before long I decided that this type of restaurant would provide great fodder for another son that occasionally does stand-up comedy. I watched one painfully thin girl spend 10 minutes at the salad bar carefully crafting a huge pile of well ordered leafy stuff. Now, I like salad as much as the next guy — which is not that much. I mainly eat it to ensure that I get some roughage in my system. But I could never understand spending dollars on a buffet only to eat cents worth of leaves.

In the neighboring booth was seated a family with young children. The problem with sitting in a booth at a buffet restaurant is that anytime someone that isn't seated at the open end wants to go back to the buffet, everyone between that person and the end of the bench must first exit. They must again exit when the diner returns.

Perhaps this is thought by parents of young children to be an advantage, because mom and dad can act as gatekeepers. I think that's what these parents were thinking. The plan seemed to work well for most of their children. But not so much for Jackson, who appeared to be four or five.

During the 20 minutes or so that we spent dining, I must have heard Jackson's dad call Jackson's name at least 200 times. When the dad told Jackson to do something, Jackson would do pretty much the opposite. After the fifth, sixth, or seventh repeated demand, Jackson would finally sort of do what his dad had demanded, but definitely not in the way the dad intended.

I had not discussed the Jackson situation with my son. After all, what needed to be said? Wasn't it obvious to everyone in the restaurant? At one point I quietly said with intended understatement, "Jackson doesn't seem to be very obedient." My son returned a sly grin, as we heard the dad say, "Jackson, get back over here!" for the umpteenth time.

We then glanced down at the floor to see Jackson doing an army crawl past our booth. The exasperated dad then repeatedly said, "Jackson, get up off the floor!" Which Jackson, of course, did not do. "Well," I said to my son, "someone has to clean the floor in this place. He seems to be doing a nice job of it."

Actually, I was somewhat proud of Jackson's father. I well remember the frustrations of going to restaurants with young children in tow. The dad never physically corrected his child. And while he was clearly frustrated throughout the meal, he never really lost his cool. Although, I must admit that if his goal was to have Jackson behave, he pretty much failed. Maybe this hefty fellow's parenting style differs when he's not in public.

There's something about buffets that tends to make people notice the more corpulent diners. Is it just my imagination, or are there really more obese folks at buffet restaurants than at other styles of restaurants? Maybe it's just human nature to fear that these folks will eat more than their fair share, leaving inadequate pickings for the other diners.

I noticed one particularly bulky couple conversing with several of the workers at the restaurant. "Tony," one of them said to a young man who was working hard behind the counter, "we haven't seen you here in the evenings lately." From their conversation, it became clear that these folks were very regular diners. I got to thinking that if a customer knows a lot of the staff at a buffet restaurant on a first name basis, it might be a sign that they're spending too much of their time there. Their steadily increasing girth might be another sign. 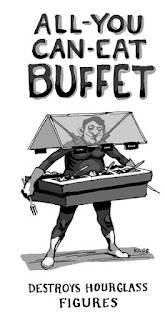 Have you ever watched the blocking strategies some buffet diners employ to hold other diners at bay while they consider their potential quarry? I notice that most buffet diners approach the counter with a kind of lustful gleam in their eyes. As they make their approach you can see their faces change. Their breathing goes from even to intense. When you see a kind of wild look in their eyes, it should be taken as a caution to avoid getting between those people and the food.

For a few of these folks, the whole event is clearly a competition of some sort. Most manage to keep it from turning into a contact sport, but they're not above using physical methods if necessary. I watched one 300-lb fellow deftly shift his weight in such a way that young Jackson, who was again on the loose, ran headlong into the man's fleshy leg. Jackson rebounded away from the dessert counter and back toward his frustrated father, who was saying something about being unable to understand what Jackson was saying with his mouth full of food.

As I was pondering all of this, my son said, "I think I'm done." "Don't you want to try the..." I began asking. "No," he cut me off, "I really think I can't eat another thing." The look in his eyes told me he was quite earnest. He apparently had more than made up for missing his morning meal. He also clearly had more discretion than some diners at the establishment.

As we walked from the restaurant, I realized that going to an all-you-can-eat buffet is an interesting study in human nature, with parallels to both domestic and international relations. Not all those that have plenty of weight are good at throwing it around, but some clearly are. Just before the door to the building closed completely, I was pulled out of my reverie by the sound of a man's voice once again calling, "Jackson!"
Posted by Scott Hinrichs at 11/28/2015 01:18:00 PM