Our dog hates the dog park

Earlier this year our city opened a dog park near our home. I very much appreciate the volunteers that spearheaded this effort and the city leaders that worked to make it happen. The original location proposed for the park was about a mile from our home, but they settled on a location that is just a couple of blocks away.

The first few times I took our dog to the dog park the place was deserted. That was likely due to timing. The park seems more popular in the late afternoons and early evenings. Saturday mornings seem to often draw a handful of dog owners as well. 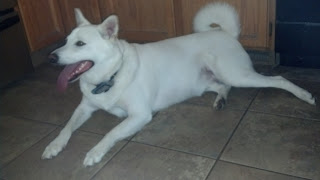 When nobody else was at the park, our dog seemed to enjoy wandering around off the leash, sniffing the perimeter. But he also tended to stay pretty close to me. Then one time when we were at the park, another owner showed up with a couple of small to medium sized dogs. They seemed quite content to frolic and run around.

Our dog watched the dogs with quite a bit of interest, but he only interacted with them when they approached him. When they did, he seemed very uncomfortable. He stood rigid and resisted their attempts to engage him in playful behavior. In fact, he ultimately snapped and snarled at them — not in a playful manner like he does when playing tug-o-war at home, but in a way that clearly communicated, "I don't like this. Stay away."

This behavior has become increasingly prevalent as we have visited the dog park throughout the season. Only once has our dog engaged in playful behavior with other dogs. Then he seemed to enjoy scrambling through the mud puddle. (The park was built in an existing drainage basin, so there's a perpetual mud puddle.) This required us to clean him when we got home, but I think this was really the only time our dog enjoyed his experience at the dog park.

I have spoken with many other owners at the park. I have repeatedly been assured that our dog will become more acclimated to the park as we take him there more often and as he gets more opportunities to socialize with other dogs. But the exact opposite seems to be the case. The more we go to the park and the more our dog gets to interact with other dogs, the less he likes it and the less he wants to be there.

I have wondered if part of the problem might be the layout of the park. It's just one large fenced area, unlike a park a few miles away that has several areas for different activities and different sizes of dogs.

Not all dogs that visit our local park are well socialized or well managed by their owners. On our last visit to the park, another male dog that initially seemed very affable kept trying to mount our dog. Our dog didn't know how to handle that situation. He snarled, barked, and nipped, but the other dog didn't get the clue. Nor, apparently, did its owner, who failed to do anything to manage the aggressor.

The Imo-Inu breed is known for its fastidiousness. Our dog doesn't like to get or stay dirty. But our dog took to sitting his white hind end in the dirt every time the would-be rapist dog came by. Our dog kept hovering near the park exit. He just wanted to get out of there.

It wasn't just that one dog that was the problem. Our dog just didn't like hanging out with any of the dogs at the park, regardless of how congenial they were. Our dog's general behavior and body language told me that he had had enough of the dog park. I felt like our visits had become a form of torture for him.

I haven't taken the dog back to the park since that visit. Nor do I plan to return anytime soon. I just can't bring myself to subject to the dog to something he has clearly come to hate. The main purpose of the dog park, as I understand it, is to provide a venue where dogs can socialize together. It seems to work well for many dogs. But not for our dog. If anything, our visits to the dog park have made his canine socialization skills worse.
Posted by Scott Hinrichs at 11/09/2015 09:28:00 AM