I Lived Under a Totalitarian Dictatorship

It's true. I lived under a totalitarian dictatorship when I was in junior high school. Mind you, it was only for two days and it was only during school hours on those days. Unbeknownst to me, my parents had received a letter from our school's principal a few days earlier explaining the exercise and asking them to keep it confidential from their children until after the plot unfolded.

We went to school one morning in December, most likely with visions of the gift cornucopia that Christmas morning would bring a couple of weeks later. School started as normal. But then the school was invaded by guys in military outfits bearing very real weapons from the "State of Triangula." They had the kids that were in charge of the school's flag lower the American flag. Then a white banner emblazoned with a black triangle was hoisted up the main flagpole. American flags were removed from the classrooms and we were put in a state of lock down.

I found a the local newspaper's coverage of the event on this Ancestry.com page (requires subscription). Recalling that the event made national news back in the day, I was able to find coverage from a couple of other newspapers: see Daytona Beach Morning Journal article and Gettysburg Times article.

To add some perspective, bear in mind that this occurred at a very unpopular phase of the Vietnam War. Domestic and foreign events over the preceding several years had caused many Americans to question the patriotism that had been common in the years following World War II. But it was also during the height of the Cold War. Tensions between Western and Eastern Bloc countries were high and fear of communist oppressive ideologies was rampant among Americans.

The Dec. 14, 1972 local Standard Examiner article featured a photo of our student body president destroying the Triangula flag at the end of the event. 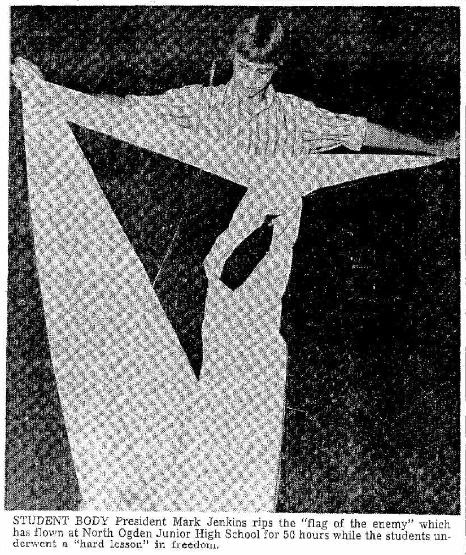 The text of the article, titled "Students Free 'After Siege' In N. Ogden" follows:


"Hooray, the Americans are coming," said one North Ogden Junior High School student this morning at the sight of an officer of the U.S. Army.

Freedom returned to the “embattled school” today at a special “freedom assembly” at which Principal Carl C. DeYoung announced the end of 50 hours of enemy occupation.

Students have attended classes, eaten, studied — and gone without smiles under the watchful gaze of armed soldiers from the mythical foreign government of Triangula.

TO CHEERS
The soldiers, actually volunteers from the local 6th Battalion, 83rd Artillery of Army Reserves, turned up at the assembly in civilian clothes to the cheers of their former captives.

Mark Jenkins, student body president, tore up the black-on-white Triangulan flag to the kind of delirium usually reserved for basketball in the school gymnasium, where the assembly was held.

The ninth-grader was asked to dispose of the flag by Lt. Col Clair Frischknecht, the 83rd’s commander, who posed as chief of Triangulan forces during the occupation.

Special tribute to the organization committee for the exercise — William Woodard, Richard Johanson and Mrs. Lynn Miller — was paid by Col Frischknecht and Maj. Gen. Ray D. Free, USA-Ret, who appreciated the military precision of plans.

Mr. DeYoung said the experience was planned for students to instill in them a feeling for the American flag and what it symbolizes— “and it’s hard to teach a feeling.”

2 DAYS
For two school days and this morning until 10:30 a.m., students lived under a totalitarian regime, including facing a military court for infractions from tearing down the Triangulan flag (Tuesday) to smiling in class.

Signs of smoldering revolt were evident at all sides this morning: dozens of students wore red, white and blue clothing to school, others wore armbands of the same color, and holes were torn in paper covering trophy cases and seasonal decorations in glass-walled banks.

“They didn’t catch me, and I’m glad,” said eighth-grader Matt Berrett, describing how he played a trumpet rendition of “God Bless America” this morning.

“You know, it sounded kind of sweet floating down the halls,” said one teacher, still wearing the Triangulan lapel pin.

TO STAND
Despite unaccustomed cooperation from pupils — who were required to stand whenever a teacher entered or left the room — some teachers grew weary of the occupation and began to sympathize with the “underground.”

“A lot of us wore the school colors (purple and gold) today rather than the dark clothing,” said drama teacher Mrs. Joyce McKean, adding “about half of my class wore armbands this morning and they’re in detention, so we’re having trouble practicing for our plays.”

Another group of “partisans” about which not much was said demonstrated the widespread interest in the experiment.

60 BOYS
A group of about 60 boys from Weber High School formed an expeditionary force for a sally to North Ogden to free the school, according to Dr. LeGrande Hobbs, who has to children at North Ogden and one at Weber High.

“The (sic) finally decided they might get kicked out of school,” he added.

Gen. Free, a Salt Lake City businessman who once commanded the seven-state 96th Army Reserve Command, said the re-raising of the American flag brought back memories of other such visions.

Recalling seeing the flag over liberated territory in Attu, Kwajalein, The Philippines and Okinawa during World War II, he said: “A thrill went through me as it rose and fluttered and showed again that freedom was abroad in the world.”

Citing Paul the Apostle that “all things are bought with a price,” he told students and parents at the freedom assembly “of the price of freedom.”

Many of the 56 signers of the Declaration of Independence were wealthy and respected men, he said, and dozens came out of the Revolutionary War with only “their sacred honor intact” after pledging that, their lives and fortunes.

Lessons then and now
More than four decades have passed since the invasion of our school by Triangula forces when I was a seventh grader. I was among the many students that were sent to trial for the misdeed of showing patriotism. I was shuffled back and forth between bureaucratic judges until I was finally sentenced to service in the library.

In retrospect, I think my act of disobedience was as much about revolt against oppression as it was about love of country. But I can say for certain that there was an overwhelming feeling of gratitude for the freedoms we enjoyed when the school was 'liberated.' Emotions of gratitude ran very deep among even the most hard core students.

Pulling off a project like this today would likely be impossible. I expect that it would be met with heavy denunciation from around the world via the court of the Internet. Back then a couple of parents opted their children out of the experience. You'd have far more parents do that today. Administrators would be investigated and disciplined, maybe even fired and perhaps jailed. But that was a different era. Can you imagine the flack that would rain down nowadays after having militia troops armed with automatic weapons storm the halls and guard the children?

The article above notes that some teachers started to sympathize with the students. That kind of thing only happens very surreptitiously in actual oppressive regimes, because such regimes are careful to fill positions like that with loyalists. My father saw this when he grew up in Nazi Germany. Government positions of all kinds, including teaching and dog catching jobs were slowly turned over to Nazi party sympathizers. Dad said that all teachers were replaced by people that knew only one thing: how to beat the hell out of the students.

Moreover, most Americans today have a different understanding of patriotism than once was the case. Trust of government is at an all-time low. Many Americans still love their country, while simultaneously harboring suspicion and distrust of that country's government. The exercise in 1972 mixed these elements, but that approach might backfire today.

My point is to demonstrate that the culture we experienced in 1972 is different enough from present day culture that it might be difficult to nowadays understand the two-day occupation project my school ran back then. It would be easy to cast aspersions at the episode from our present sociocultural understanding. But I think that doing so would cause us to miss some valuable points.

This event left a lasting imprint on me. I venture to say that more than four decades after the event, all of the surviving students that were involved — except those that ended up burning their brains out on drugs — have visceral memories of the occupation. Thus, it was quite memorable.

At the time of the event, most students involved actually thought about what it might be like to live in a society with more restricted freedoms. I can't say, however, whether the goals of instilling appreciation for what the American flag represents and gratitude for the blessings of living in America were achieved. That would require studying that body of former students.

I think that the experience has at least helped inform whatever opinions those former students currently have of government, country, and patriotism. That ought to form part of a monument to the careers of those that worked to pull off the project.
Posted by Scott Hinrichs at 5/03/2015 08:04:00 PM

Wow. That's all I can say. Thanks for sharing this.