I can remember being shocked when my uncle told me that Dad had owned a motorcycle when he was younger. Dad seemed too stern of a German to be the motorcycle riding type.

But perhaps this helps explain why Dad bought the family a motorcycle when I was 12. I rode that thing extensively over the next half dozen years. My kids are still stunned about the fact that as a teen I was an avid skateboarder and motorcycle rider. To them these things seem like symbols of hoodlumhood.

This is what my kids think of when I tell them of my motorcycling days:

But the motorcycle our family owned was a Honda Trail 90 that looked like a girl's bike:

Our automatic clutch Honda 90 couldn't go very fast. But it was great on trails. It had two sets of gears. You would shift between the high and the low set by putting the bike up on the kickstand in neutral, rotating the rear wheel, and flipping a switch below the engine.

In the lowest gear that ugly Honda 90 could climb up the steepest trails we could find. Sometimes we'd have to walk along side it while working the throttle. But it could climb.

Back when I was a teenager most families in the area had at least one motorcycle that their kids used. I always felt self conscious about our inferior bike because most of my friends' bikes looked like this: 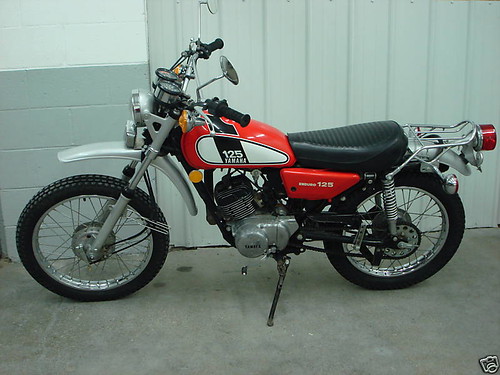 We had access to copious trails in the hills north and east of our community. Most of that area transitioned to residential neighborhoods over time. There are still some trails left, but it's illegal to ride motorized vehicles on most of them.

My brothers and I crashed that old Honda 90 with some regularity. But it was a pretty tough piece of equipment. We frequently bent or broke the mirrors. But crashes seemed to otherwise cause only cosmetic damage. The same was not necessarily true of our bodies. But given that most crashes occurred at relatively low speeds, I don't recall any of us getting actual medical treatment for our injuries.

By the time I was in my early 20s nobody in the family would ride the old motorcycle anymore. Dad traded it in on a Honda CB650 street bike.

I rode that bike quite a bit over the next several years, mostly to and from school and work. Some of my friends had street bikes, so we occasionally took longer recreational rides. But eventually I quit riding the bike.

It happened on a gorgeous Saturday in the spring of the year. It seemed like the perfect day for a motorcycle ride. I'm not sure that bumper stickers like this actually do much good:

During the hour I was out riding on that sunny Saturday I had multiple instances where people dangerously cut me off or nearly ran me down. Finally, when I was a couple of blocks from home I succeeded in making an emergency stop about two inches short of the broadside of a car whose driver had decided to make a U-turn without bothering to look around or signal. The lady's eyes were as big as saucers when I curtly told her through her open window to check over her shoulder the next time she attempted such a maneuver.

I was chagrined as I rode home and parked the motorcycle. My anger cooled as I walked into the house and I suddenly felt wobbly on my legs as it hit me how close I had come to being on the wrong side of all of those motorcycle injury/fatality statistics.

Although I didn't intend it, I never ended up riding that motorcycle again. I have ridden other motorcycles on occasion without experiencing PTSD. But that Saturday was the last time I rode the Honda CB650. Years later I saw the bike in dilapidated condition in my younger brother's garage. Ever the handyman, I think he always intended to rehabilitate the thing. But it's now an antique that would take quite a bit of work.

My older brother bought a nice Harley-Davidson a few years ago. I don't really see myself doing that. Unlike lots of guys in my age range, I don't feel a compelling need to try to recapture my youth that way.

Besides, I don't think I have the right shape for it. A few years ago we saw a guy on a Harley go tearing very fast and very loudly up a residential street. My young teen son said, "I think that guy stole that motorcycle." When I asked him why he assumed this, he replied that the driver was too slender. He then said, "I've never seen a Harley driver before that didn't have a big gut."

My oldest brother's family has gotten four-wheel ATVs to ride as a family. That's fine for them. But it seems to me that there are so many of those things around that you can only ride them where there is a lot of off-road traffic. You're either choking other people's dust or caked in the mud they spatter. I'd prefer to hike.