My Days As a Skateboard King

Unlike my kids, I grew up in an era when we didn't know what a photo would look like until it was professionally developed and printed. And that could take any amount of time, because sometimes people waited for-stinking-ever to take the exposed roll of film to a place like this:

The first time we'd know what the pictures we took actually looked like was when we picked up the photo prints a few days later. Or maybe a few weeks or months later.


This means that instead of having thousands upon thousands of electronic photos of our youth (i.e. selfies) like the younger generation, my wife and I have a couple hundred hard copies of (mostly grainy, poorly focused, badly composed) photos from our younger years. At times we pull these photos out for one reason or another. Our kids usually look at a few, often with grimaces on their faces while uttering terms like, "dorky."

But my kids were favorably impressed when I pulled out a block of photos taken during my teen years when I was heavily into skateboarding. Although we have no video of my skateboarding prowess, some of these photos make it look like I could pull some pretty rad moves. And I could. But I never felt like I could be as good some of the other skateboarders I knew.

My younger brother and I got into skateboarding just as wheels were making the transition from loose ball bearings to precision sealed bearings. The old wheels were noisy, dirty, and hard to care for. The newer wheels were amazingly better in all of these aspects.


We lived through the transition of skateboard decks from short and skinny to wider and longer. Nobody sold longboards back then, so my brother and I made our own with Dad's help.

Skateboarding was an avocation, not a way of life. Although we spent a lot of time skateboarding and earning money to buy equipment, being a boarder didn't mean being bad or having to dress, groom, or speak a certain way.

We mostly skated on roadways and in parking lots. Several times we skated down a nearby mountain pass. Yeah, that was kind of crazy. We were always on the lookout for banked surfaces. A nearby concrete reservoir dried out a few weeks after they turned off the secondary water each year. We'd take brooms and sweep it clean to ride its angled walls. That required trespassing, but we never damaged anything. Other than ourselves.

We were especially gratified when a nearby ski resort built a skateboard park with glorious banked curves. (They tore it out a couple of years later.) But we never even imagined the kind of grinding and flipping tricks that are commonplace nowadays.

With the maneuvers we did in those days we still managed to sustain our fair share of road rash. Nobody wore safety equipment back when I first started skating. That started to change as skate parks popped up, first in California and then elsewhere, that required helmets and sometimes knee pads and elbow pads.

We avoided investing in safety equipment, preferring to spend our hard earned cash on actual skateboard parts. That changed after I had one particularly nasty tangle with the ground at a high rate of speed. Although I sustained no broken bones — not broken enough to go to the doctor anyway — I achieved enough soft tissue damage to change my mind about safety gear. We bought hockey helmets, padded gloves, and various joint pads. Mom even made us each a pair of padded skating shorts.

I put two of my best boards in a safe storage location when I left to serve as a missionary at age 19. But I never really skated again after that. Different interests engaged me after returning two years later. Years passed, but somehow I kept those two boards (one shown below), even after getting married. 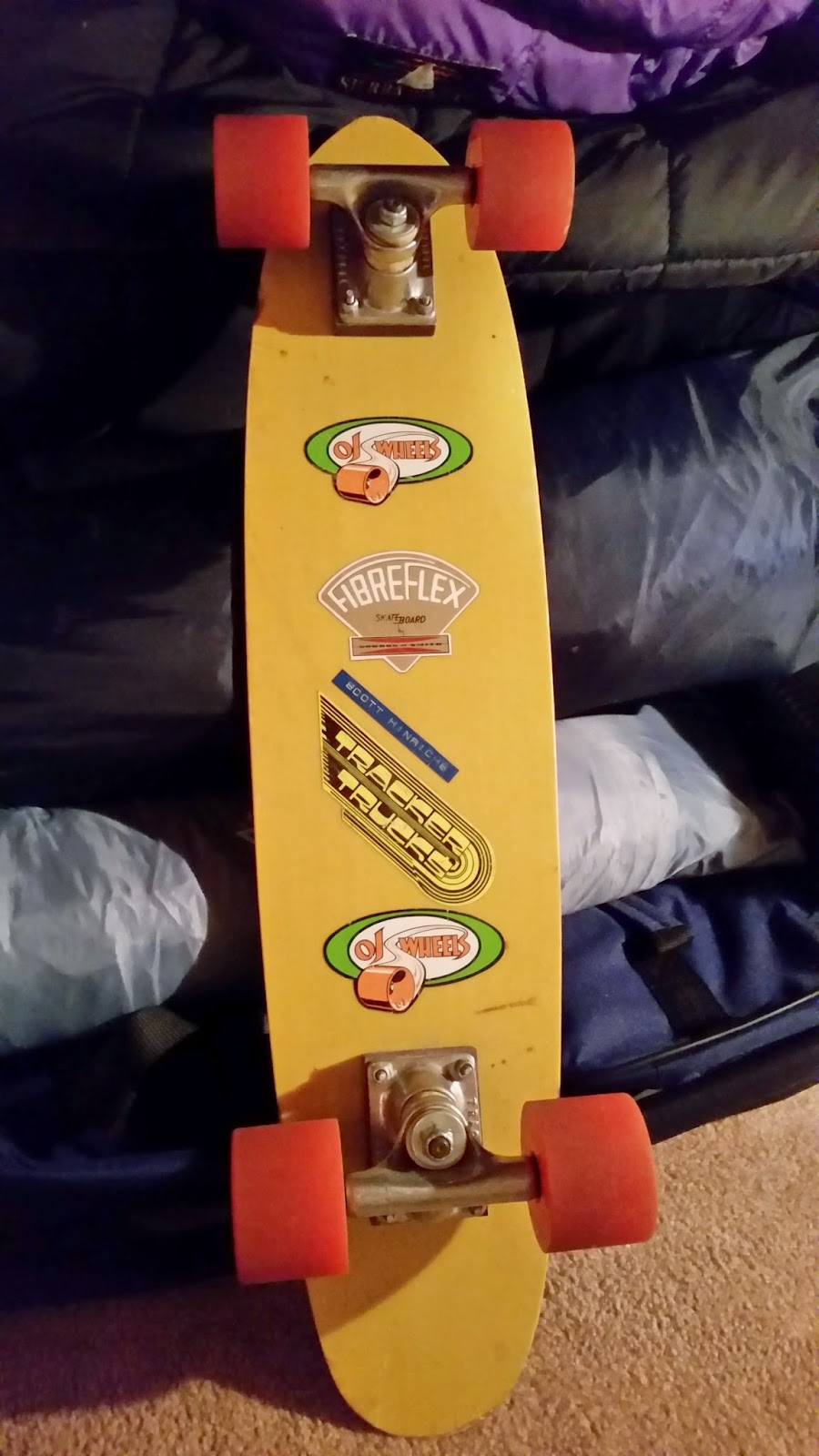 My formerly great balance diminished enough after my first major Multiple Sclerosis attack to render me incapable of safely using a skateboard. I can still ride a bike, but I can't balance on a skateboard.

Now many years later those boards are still stuffed away in the crawl space. I brought them out when my kids started skating. But they had little interest in my antiques, given that better modern versions could be had for relatively cheap.

I'm not even sure why I keep those old skateboards. Are they mainly nostalgic reminders of one of the few things I thought I did well as a teenager? Or are they like so much other stuff that we have in the house that we haven't yet gotten rid of simply due to inertia?

I'm thinking (hoping) that when we do actually get around to de-junking the crawl space that these ancient skateboards will depart my ownership with little regret. I have fond memories of my skateboarding days, but it doesn't bother me at all that those days are long gone.
Posted by Scott Hinrichs at 2/12/2015 11:29:00 AM