As a teen I heard a Soviet defector talk about life in the USSR. I was somewhat mystified when he explained that many people in his home country were afraid of liberty. Why would anybody not want liberty? Although liberty offered more affluence, these people feared the unknown and personal accountability. Despite their dismal circumstances, they were addicted to benefits offered by the state. Their dependency culture had bankrupted their moral character, robbed them of initiative, and turned them into willing serfs.

Political economist Nicholas Eberstadt in this WSJ op-ed provides some rather stunning evidence to bolster his claim that Americans are well on their way to the kind of character debauchery that was endemic to Soviet life a few decades ago. "The growth of entitlement payments over the past half-century" he writes, "has been breathtaking. ... Even after adjusting for inflation and population growth, entitlement transfers to individuals have grown 727% over the past half-century...."

Even after all of the New Deal programs, federal spending was mainly concentrated on "limited public services and infrastructure investments and ... defending the republic against enemies foreign and domestic" as late as 1960. Now transfer payments to individuals comprise two-thirds of all federal spending.

The terms "entitlements" and "transfer payments" are far too antiseptic. What these terms mean is taking property from someone and giving it to someone else using the coercive power of government—activities that bear more than a passing resemblance to behavior proscribed by the 8th and 10th Commandments.

Despite current partisan rhetoric, Eberstadt notes that "the explosion of entitlement spending" has been a bi-partisan affair. "Between 1960 and 2010, the growth of entitlement spending was exponential, but in any given year, it was on the whole roughly 8% higher if the president happened to be a Republican rather than a Democrat." A politician is a politician regardless of party.

There is no shortage of those that suggest that our bloated entitlement spending is exactly the right thing for America—the perfect prescription for assuaging the evils of the days when people actually had to worry about how they would get their next meal. They bandy about terms like "community" and "social justice" to justify programs that turn sovereign citizens into government subjects that can more easily be controlled by their government masters.

The reordering of federal priorities has completely altered the face of our political system, as well as the way that Americans think about and approach life. Eberstadt writes:


"From the founding of our nation until quite recently, the U.S. and its citizens were regarded, at home and abroad, as exceptional in a number of deep and important respects. One of these was their fierce and principled independence, which informed not only the design of the political experiment that is the U.S. Constitution but also their approach to everyday affairs."

"The corollaries of this American ethos were, on the one hand, an affinity for personal enterprise and industry and, on the other, a horror of dependency and contempt for anything that smacked of a mendicant mentality. Although many Americans in earlier times were poor, even people in fairly desperate circumstances were known to refuse help or handouts as an affront to their dignity and independence. People who subsisted on public resources were known as "paupers," and provision for them was a local undertaking. Neither beneficiaries nor recipients held the condition of pauperism in high regard."

Entitlement spending is swamping this old system of ethics. In fact, Eberstadt notes, "The U.S. is now on the verge of a symbolic threshold: the point at which more than half of all American households receive and accept transfer benefits from the government. From cradle to grave, a treasure chest of government-supplied benefits is there for the taking for every American citizen—and exercising one's legal rights to these many blandishments is now part of the American way of life." 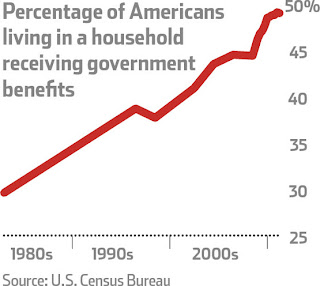 It would be easy to blame all of this on the political class. But that would be like blaming the whole problem of drug addiction on the pushers without respect to their addicted clients that demand the drugs. Pushers would not exist without junkies.

Ah, but amid the sounds of Americans gorging themselves at the government trough one occasionally hears someone impertinently asking how we're going to pay for this feast. Some pause momentarily to consider this before shrugging it off and figuring that the same political class that brought the swill will somehow figure out how to keep the supply coming.

Our national addiction to government supplied benefits has dulled our moral and ethical sensibilities. Not only is there decreasing aversion to dependency; benefits are actively sought regardless of  impending fiscal and moral bankruptcy. Eberstadt writes:


"As Americans opt to reward themselves ever more lavishly with entitlement benefits, the question of how to pay for these government transfers inescapably comes to the fore. Citizens have become ever more broad-minded about the propriety of tapping new sources of finance for supporting their appetite for more entitlements. The taker mentality has thus ineluctably gravitated toward taking from a pool of citizens who can offer no resistance to such schemes: the unborn descendants of today's entitlement-seeking population."

It's worse than taking candy from babies. We are taking from pre-babies and even the babies of those pre-babies—the unborn that have no vote, no lobbyists, and no voice in government. And we somehow find this morally acceptable.

Unfortunately, many of those unborn on whose labor we are banking may never be born. It has been shown over and over again that populations that devolve into dependency on social programs lose their desire to bear and raise children. Combining decreasing population with the time value of money means that every dollar we steal from children of the future will amount to many dollars in their lifetimes, dooming them to a lifetime of servitude to pay for our excesses.

While some citizens and even some politicians are working to draw attention to America's impending fiscal disaster, a greater concern, suggests Eberstadt, is a "possibility [that] is even more frightening—namely, that the present course may in fact be sustainable for far longer than most people today might imagine." The nation still "has vast resources to squander."

Eberstadt chillingly opines, "Such devices might well postpone the day of fiscal judgment: not so the day of reckoning for American character, which may be sacrificed long before the credibility of the U.S. economy."

There are two problems. (1) Republicans took money that we paid into these programs and gave tax cuts to the rich. Now Baby Boomers are retiring, and the rich don't want to give the money back! (2) Health care costs in America are double compared to other developed nations, and continue to skyrocket. If we can control health care costs, Medicare won't run out of money.