As we prepared to fetch flags for my Boy Scout son to put up throughout the neighborhood this morning in commemoration of Patriot Day, he asked why we were celebrating terrorist attacks that killed thousands of people.

Having been a baby on 9/11/01, my son has no memory of life before the attacks. He doesn't remember a time when we were not at war in Afghanistan. He knows nothing of air travel without the indignity of being treated as a suspected terrorist.

My wife explained that we were not 'celebrating' the terrorist attacks but commemorating our response to the attacks. We are remembering the victims and the horror, not to think of ourselves as victims, but to bolster our resolve to maintain the cause of liberty. We are reminding ourselves that liberty doesn't just happen; it is a task that requires a purposeful approach. Because there are people out there that hate liberty.

I thought about my son's question as I drove to work. A program on the radio was replaying snippets from that day of infamy 11 years ago. Suddenly I was caught up in the odd mix of emotions I felt on that day, experiencing them anew for a brief time.

9/11/01 was a nationally defining moment. The now well-known photo of firefighters raising the American Flag amid the debris of the fallen towers became a defining symbol of the day. 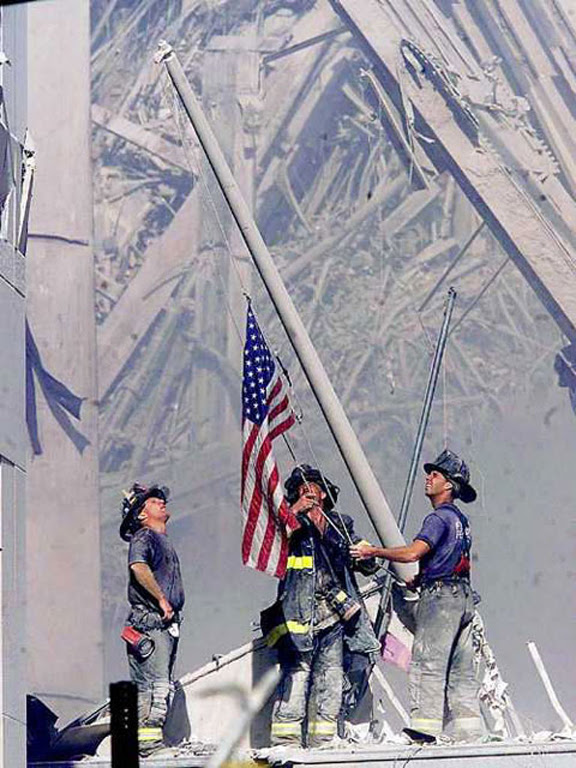 Many artists created works in the wake of 9/11. As I again felt the pervasive somberness of that day, I thought of Exhibit 13, one of the more poignant of these works. Oddly enough, it is by the Blue Man Group, which is more known for its clownishness than for its serious acts. Free of political commentary, Exhibit 13 evokes the memory of those ordinary people that died in the 9/11 attacks.