"No. No! NO!" I screamed inside my mind while making a vain attempt to keep the incredulity off my face. "We are not getting another dog," I said flatly. We were looking forward to being pet free within the next few years.

A relative had acquired an adorable Sheprador puppy (German Shepherd / Labrador mix) on Thanksgiving from an owner near our home. Being close by, they dropped in with their new puppy for a visit. We were very surprised that our 9-year-old Imo-Inu (Shiba Inu / American Eskimo mix) interacted with the puppy with curiosity rather than animosity. He has a long history of being good with humans but not so good with other dogs.

Later that evening our son who is on the autism spectrum proposed getting one of the remaining puppies from the same large litter. The puppies were only a month old but the mother had stopped giving milk. Caring for multiple puppies that still need milk is challenging, so the owner was looking to sell the puppies at a bargain price.

The whole idea seemed preposterous to me. But I could tell that my objections were inadequate in dissuading our son. The following day we convened a family council, since the addition of a puppy would significantly impact everyone in the home. Many valid concerns were raised, including:

Unfortunately, our son interpreted these concerns as the family ganging up on him. He guaranteed that he would meet all of the puppy's needs, walk both dogs, minimize impact on other family members, and otherwise deal with related issues, or else find a new home for the pup. But I knew he was committing to more than he was capable of actually doing.

After our son left the meeting with the matter unresolved, I realized that he would probably end up bringing a puppy home. Our daughter came to me expressing concerns that everyone in the family would be angry with her brother if he did bring a puppy home. I explained that people would be unhappy, but that it's hard for anyone to remain angry for long when a puppy is involved.

As I prayed about the matter, I told the Lord all of the burdens that would result from adding a puppy to our household. The message I sensed from the Spirit went something like, "Yeah, I know what it's like to have children make choices that increase burdens. It's kind of what I do all the time. You see, there was this night in Gethsemane and this cross on Golgotha. Then there are the constant problems and prayers. ... Let your son do as he wishes and then deal with the fallout. It will be good for him." 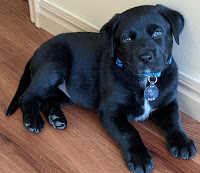 So the following day after getting paid, our son brought home an adorable puppy that weighed about 6½ lbs. whom he dubbed Charlie. While everyone loved cuddling with Charlie, the weeks of puppy urine and nighttime forays into the yard soon brought us to reality.

The moniker Charlie gave rise to a variety of nicknames, such as Prince Charles, Chuck, Chucky, Chuckles, Chuckles the Pup, and Lieutenant Chucklebucket.

The puppy still needed milk for the first couple of weeks. We ended up feeding him unpasteurized goat milk from Sweet Deseret Farm. But he soon craved solid food. We followed the directions of an expert to soak puppy kibble in goat milk, but Charlie soon made it clear that he disliked soggy kibble. He liked crunchy kibble and he would also go crazy for real meat.

Interactions with our senior dog, whom I dubbed the Commodore or King Nui, were relatively safe but less than sanguine. The Lieutenant constantly wanted to engage in playful interaction with the Commodore. The corpulent old man, who suffers with arthritis and currently spends most of his days sleeping, was generally unwelcoming of the Lieutenant's exuberant overtures. Low growls and occasional sharp barks became common.

Prince Charles also wanted to do whatever King Nui was doing. He wanted to play with King Nui's toys, eat King Nui's food, sleep in King Nui's usual haunts, and go outside whenever King Nui went outside—much to the chagrin of the old codger, who tolerated the pup but generally responded with a "Hey you rotten kid, get off my lawn!" attitude.

Mind you, the Commodore has been our only pet these many years, so he has ruled the roost. The introduction of the Lieutenant into the Commodore's space really shook things up for the old man. He was more than a little jealous. He took opportunities to demonstrate dominance, brusquely telling the pup to keep his distance and often taking toys away from the little tyke.

Our son tried to keep his puppy promises, but he soon discovered that the critter's needs frequently exceeded his capacity to deliver. The puppy slept in a crate in our son's room, so he was the one to tend to the puppy's needs at night. There was no sleeping in for our son either. He had to get up when the puppy got up.

It turns out that Shepradors are very active animals. They are also social and crave lots of family interaction. One expert suggested that Shepradors typically need two hours of high activity and close interaction daily or they become bored and destructive. They also need plenty of room.

Charlie was smart. Shepradors are also pleasers, so he quickly learned his name and he learned several commands such as sit, up, wait, and come. He did OK with go potty. We later worked on off and down. But the puppy was taking a toll on the whole family. Everyone groused about having to puppy-sit, having to take the puppy outside in all kinds of weather, and constantly guarding person and property from playful teeth and claws.

Finally about a month into the puppy project, our son came to me and admitted that he could not keep his promises concerning his dog. He was feeling defeated when he admitted that he was ready to find a new home for Charlie. I told him that this was perhaps the most mature decision he had ever made. He should see it as a victory rather than a defeat.

Concerned that selling a puppy a couple of days before Christmas might be more likely to lead to an impulse purchase by someone who isn't really ready to care for a dog, we waited until after Christmas to list Charlie for sale. We found a willing buyer right away who had grown up in a family that bred and raised a certain dog breed. We were relieved that the new owner was well versed in puppy and dog care.

Due to circumstances, Lieutenant Chucklebucket boarded with us for another week before going home with his new owner. During that week we started calling him by the name selected by the new owner. Throughout the week, our son gradually distanced himself from puppy care duties as he grieved for his dog's departure. When I later asked him what he had learned from the experience, he let me know that it was too soon for him to go there. He needs time to process emotions first.

Roughly 48 puppy free hours have passed in our home since the Lieutenant's departure. The first afternoon and evening, the Commodore collapsed and spent 4-5 hours lying in one spot. He has since reclaimed many of his former haunts that the Lieutenant had commandeered. The old man seems much more relaxed.

So do our other family members, for that matter. It's almost like climbing off an exuberant theme park ride and then standing on firm ground in a quiet corner of the park. Part of me keeps expecting the Lieutenant to scramble around the corner and attack my shoelaces. Still, our oldest son echoes what other family members feel when he confides that he misses the puppy, despite the fact that his ear is still bleeding from a puppy scratch.

We sold the puppy's crate, toys, bowls, playpen, food, and other supplies with him. We still have some temporary fencing to sell that I used to protect outdoor HVAC equipment. So the story isn't quite complete yet.

While the Commodore was generally uncomfortable during the five weeks of puppymageddon that spanned Thanksgiving through New Years, he does seem to have learned some canine socialization skills that he has lacked until now. King Nui has been regularly prompting me to walk him to the nearby dog park, where he actually chooses to enter and greet other dogs with surprising calmness. He doesn't do much with them other than to simply greet them. And he soon lets me know it's time to leave. But this behavior is so different than it used to be BPE (Before Puppy Era) when the Commodore hated the dog park and didn't know how to behave around other dogs.

Personally I am very relieved that Lieutenant Chucklebucket has gone to a new home. Pretty much every concern that was raised in our family council weeks ago played out precisely as I had anticipated. But I wouldn't say that the burdens we bore during these weeks have any significant comparison to the Savior's atonement, notwithstanding the Spirit's whispering on the matter.

Our son has discovered that, while the desire to nurture another being was good, he wasn't in a position to do it very well and it distracted from other goals that he realized were more important at present. He is nursing some natural emotional pain as he moves on. Perhaps his development is the most valuable outcome from the holiday weeks of the puppy.