My newfound fascination with the unfollow button

I have recently been unfollowing many of you. I was going to write something trite like, "It's not you; it's me." But that wouldn't be completely true. 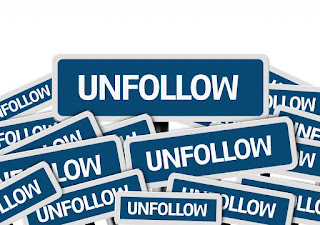 It started out with just a trickle. I didn't really think much about why I was doing it. After looking at one of your posts that I thought was inane, I just tapped on the little down arrow and selected the unfollow link. It was so easy. The guilt and FOMO (fear of missing out) that I expected to feel never materialized. Instead I felt a sense of euphoria, as if fetters with which I had been bound suddenly melted away.

That intoxicating feeling resulted in unfollowing increasing numbers of friends. Yes, I know that if this trend continues my feed will soon be empty. But I'm wondering if that's really such a bad thing, considering the general quality of the material I see in my feed.

This process has caused some introspection, allowing me to see some patterns appear as I have unfollowed increasing numbers of you. Let me plainly admit that the moment I see that your post has foul language or risqué images/messages, I choose to hide it. I just don't need that junk in my head. If too many of your posts are laced with this kind of crap, it's just easier to unfollow you than to sit around hoping that you will at some point post something of value.

Actually, those of you whom I have unfollowed for such unfortunate messages have been few. Nor have I unfollowed any of you because I disagree with you politically, religiously, or otherwise ideologically. I appreciate diversity of thought. Value exists in having one's positions challenged and in recognizing that there are thoughtful people of goodwill who see things differently.

When my feed is jammed with 40 of your shared or liked items in a single day, it's just too much. I'm overwhelmed. I don't have time to deal with that kind of volume. Nor do I need to clog my limited mental bandwidth with most of the material you share or like.

Please realize that the most entertaining stuff you send across my feed has usually come to me many times already. Reruns. Much of the other stuff in my feed does little to enrich my life. When the great majority of material I see from you falls in these categories, I unfollow you.

I'm also going to unfollow you if you overload my feed with political posts, regardless of whether I agree with you politically or not. We all know that the vast majority of political posts on social media amount to sniping at the opposing party and validating your own party, without providing much newsworthiness or informative value.

I ... have ... had ... enough! I do not need to be exposed to breathless political drivel to be sufficiently informed about political matters. An occasional thoughtful political message is fine. But a constant feed of political nitpicking daily? Just go away already.

One more thing. Keep your passive aggressive posts to yourself. Every time I see something like, "I bet this won't get very many likes," or "I'm going to rant..." or any other approach that tries to make me feel like garbage if I don't repost, share, or like something, I'm going to unfollow you. I'm tired of seeing posts of that nature. It's bad social media citizenship.

Oh, and feel free to return the favor. It won't bother me at all if you unfollow me. I won't know that you've unfollowed me. Nor will I care. You have your life to live. You are not required to spend your limited resources paying attention to stuff I post, like, or share.

There, I got that off my chest. I hope we can still be friends. Just because I don't find value in everything you value does not mean that we can't have a relationship. I wish you goodness and happiness, despite no longer following you on Facebook.