The songs I cannot sing

In the LDS ward where I grew up we frequently sang There Is Sunshine in My Soul Today. I guess it was a favorite of whoever selected the hymns for sacrament meeting. The lyrics of the second verse are indelibly imprinted on my mind:

There is music in my soul today,
A carol to my King,
And Jesus listening can hear
The songs I cannot sing.

As a child I thought this referred to a lack of musical talent, because we certainly had people in our congregation that 'sang' loudly, although, they could not really sing. 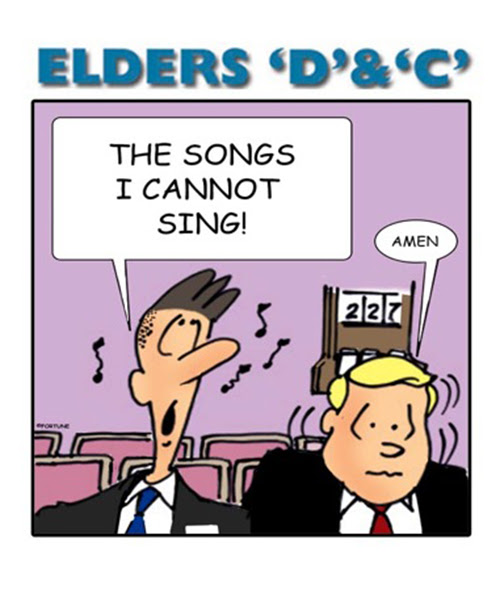 One time I complained to my mother about the singing of two older widows in our ward that often sat beside each other. It is no exaggeration to say that when they sang together it sounded like the strains of two alley cats keeping the neighborhood awake at night. Mom explained that in their younger years these sisters had each had a lovely voice and that, although age had taken its toll on those voices, their singing still sounded beautiful to the Lord.

From this experience I came to see the verse about "The songs I cannot sing" as meaning that Jesus finds our singing to be beautiful, even if it doesn't sound that way to the natural ear. A variation of this was mentioned by Elder Dallin H. Oaks in the October 1994 general conference.

I had been invited to speak at the Great Basin LDS Deaf Conference, hosted by the Salt Lake Valley (Deaf) Ward of the Salt Lake Park Stake. Over three hundred deaf brothers and sisters were in attendance. The members of the stake presidency and I were almost the only adults in the congregation who could hear and who attempted to sing audibly. The rest of that large assembly sang with their hands. Hardly a lip moved, and hardly a sound was heard except the organ and four faint voices from the stand. In the audience, all hands moved in unison with the leader as the audience signed “The Spirit of God like a fire is burning!” (Hymns, 1985, no. 2). As we sang together, the Spirit of the Lord descended upon us, and we were made ready for prayer. Our sacred music is a powerful preparation for prayer and gospel teaching.

Indeed, Jesus could hear the songs that the hearing impaired saints could not sing vocally. And so could anyone that was in tune with the Holy Spirit.

As a young adult I came to comprehend that there was a deeper meaning to the phrase, "The songs I cannot sing." If you've ever attended a temple dedication you've heard a choir sing Evan Stephens' Hosanna Anthem followed by the congregation joining the choir for at least some verses of The Spirit of God.

Although I think that the lyrics of Stephens' anthem present a valuable message, I'm not very fond of the music. It seems like an overwrought effort to capture every conceivable range of romantic era musical gymnastics. But that day when we began singing The Spirit of God with the choir, I had such a powerful spiritual experience that I was completely overcome. Although I literally could not sing the words with my mouth, I was singing them with my spirit in a much more profound way than I had ever sung a hymn before. I knew that the Lord could hear the words my natural voice could not sing.

I thought about this experience yesterday in sacrament meeting as the congregation sang Behold the Great Redeemer Die. There are 28 hymns in our current LDS hymnal that are dedicated to the sacrament (although, some others can be used too). If you attend sacrament meeting weekly you are exposed to most of the sacrament hymns with regularity. I have sung this hymn many times throughout my life. But yesterday I was so overcome with what the Holy Spirit was communicating to me that I could not voice the second or third verse. I finally sang part of the fourth verse with a quavering voice.

Some chalk this kind of thing up to simple emotionalism. I admit that some religious people conflate emotionalism with spiritual rapture. But it's not that at all. Deeply experiencing communion with the Holy Spirit can at times cause an emotional response. But not always. And it certainly has never worked the other way around for me; sentimentality has not brought the Spirit. But explaining a spiritual experience to someone that has never had such an experience is like the proverbial attempt to explain saltiness to someone that has never tasted salt.

Even when we can sing the words of a hymn clearly, our spirits can at times sing strains that could never be voiced by any human mouth. And in return, the ears of our spirit hear heavenly choirs singing melodies beyond natural human comprehension. Sacred music is really just a framework for this kind of singing to occur. When it does occur, Jesus hears the songs we cannot sing.

This kind of thing can happen when we listen to sacred music. But I believe that it is much more likely to happen when we actively participate in sacred music. This is why Elder Oaks in the previously cited October 1994 general conference talk chided church members that "have become neglectful in ... the singing of our hymns." It is why he invited us "to keep singing that we may draw ever closer to him who has inspired sacred music and commanded that it be used to worship him."

I want more opportunities for my Savior to hear the songs I physically cannot sing, not fewer. So I do my best to sing sacred music when the opportunity arises. Though my vocal abilities deteriorate as is the way of this world, yet will I strive to sing praises to my God. Though my natural hearing diminish, yet will I strive to hear heavenly choruses with my spiritual ears.

The Lord equates sacred singing with prayer (see D&C 25:12). Sacred singing has brought me such spiritual joy that I hope that I will regularly be found in this kind of prayer until my last breath.
Posted by Scott Hinrichs at 5/23/2016 01:33:00 PM

Totally agree. Sometimes we feel things too great to be adequately expressed by word or even song. Happily, our Heavenly Father who knows the thoughts and intents of our hearts, can hear our ineffable praises and gratitude.