Upgrading from Windows 7 to Windows 10: Some glitches and frustration, but it works now

Like everybody else that has a Windows 7 system, I got a new Windows 10 icon in the task bar of my computer a few months back promoting a free Windows 10 upgrade. (Yes, free. Because Windows 8 was disastrous for Microsoft and they have to do something to retain customers.) My family currently has 6 Windows machines, three each using Windows 7 and Windows 8. I thought that getting them all onto the latest Windows version without additional cost would make my life easier.

The Windows 10 upgrade was released at the end of July. But I have been pretty busy for the past few weeks. So I put it off until a few days ago. I finally clicked on the Windows 10 icon and clicked the button to get started. The update was downloaded in the background and I was promised a notification when the process finished. I came back a while later and clicked on the icon again to see what was happening. Although I had received no notification, the download was complete and the installation could begin. So away we went.

Privacy concerns
Finally I got to the login screen. Then there was a message saying that the new system would do all kinds of fancy things. All of these things are code for "You're about to give Microsoft permission to know everything about you and what you do on your computer, including keystrokes. Yeah, that means Microsoft gets your passwords, account numbers, browsing history, and everything else." 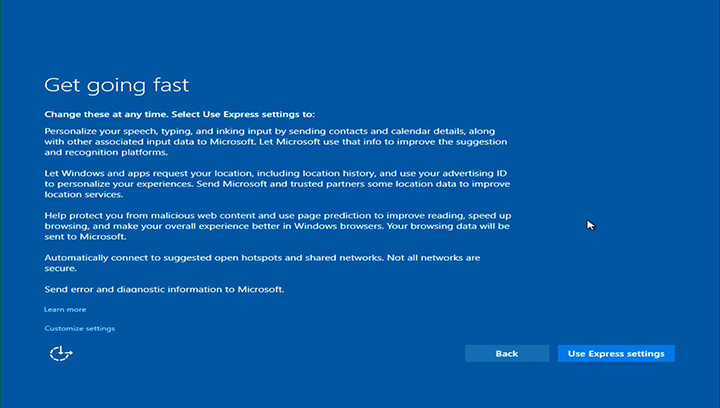 A tiny link at the bottom of this screen lets you customize these settings. I did so. This Polygon article and this Jonathan Porta blog post do a decent job of explaining what these options mean. Microsoft assures us that all of this data sharing will significantly enhance the user experience. So leave the options you're comfortable with turned on and turn the others off.

The Windows 10 screen says that you can change these settings at any time. And you can. But first you have to find where Microsoft has hidden them. Windows icon -> Settings -> Privacy. You can also just start typing privacy in the taskbar until you see a link to the privacy settings.

Disaster
So I finally finished the installation and I waited breathlessly as the main Windows screen resolved. My familiar desktop background and icons started to appear. A new taskbar partially appeared. And then the screen flashed off and on about once per second. And it just kept doing that. I searched on my phone for solutions and found several. Unfortunately, they all required keyboard strokes and/or mouse clicks, none of which worked at all.

So I did what any decent tech person would do; I hard booted the machine. (Hold down the power button for at least four seconds.) But when it booted back up, the results were the same. I again hard booted. But instead of logging into Windows, I held down the Shift key while clicking the Restart option. That brought me to a screen where I chose Advanced options. One of those options was to boot in safe mode.

Once in safe mode I tried to apply some of the various fixes I had found. But I couldn't make any of them work. So it was with a heavy heart that I went to the recovery screen and selected the option to revert to Windows 7.

I honestly expected my machine to be completely messed up at that point. In fact, a popup message almost promised as much. But everything worked just fine in Windows 7. I was pleased with that, but sad that I wasn't able to get Windows 10 to work.

One idea about fixing the flashing screen problem involved downloading an experimental Windows 10 driver for my graphics card, waiting until Windows 10 is installed, booting to safe mode, and installing the driver. One approach for fixing the taskbar problem involved entering commands to change Windows registry values in PowerShell. I'm a tech guy, so I felt comfortable doing this stuff. I wouldn't expect the average user to try this kind of thing.

Yesterday I decided to launch into it. I again clicked the Windows 10 icon and clicked the option to go ahead. After a few seconds of thinking the window disappeared. And then ... nothing. My computer didn't do anything. Windows 7 just worked like usual.

After futile attempts to get the update to function, I finally checked in Windows Update and found the Windows 10 notification there. I clicked the option to install it. It had to go through the whole download process and installation process again.

When that hour-plus activity was finished, I was ready to force Windows 10 to boot to safe mode, but something inside said to just try booting normally first. I did that. The main screen booted up without any problem. No flashing screens. The taskbar worked fine too. Go figure. Maybe Microsoft updated its software during the two-day interim.

I launched a variety of applications and tried various activities to see if the new operating system had broken anything. Everything I tried worked, including my VPN to the network at work. I had read something about some people needing to reinstall VPN and VM software. All of mine worked without reinstalling it.

Except for the audio. I had an error message telling me that the Dolby Advanced Audio software expected an old driver, while I had a newer driver installed. Moreover, when I played audio, the speakers sounded very quiet. The audio also had glitches: gargles, beeps, slowdowns, slurs. It was weird.

I searched for solutions to the audio problem. Some of them were quite technical. Some involved downloading drivers I couldn't find anywhere on the internet. It was frustrating. Finally I went into the device manager, clicked the button to delete the audio driver, checked the checkbox to delete related software, and then rebooted the machine, knowing that Windows would automatically reinstall the (hopefully correct) driver.

When Windows came up again, the audio worked just fine. The volume was normal and the glitches were gone. I listened to a variety of stuff to make sure it worked as expected.

So now I have Windows 10 up and running on my computer that had previously been running Windows 7. I think I will next upgrade one of the Windows 8 machines, probably the one the kids use in the living room. If all goes well, I will probably move on to the Windows 7 laptop. Then probably my wife's Windows 7 machine, if she lets me. (She once had an unfortunate Windows 8 upgrade attempt that left a sour taste in her mouth for operating system upgrades.)

Should you upgrade to Windows 10?
That's a question that's difficult to answer. You have to face the fact that Microsoft will eventually discontinue support for Windows 7 and Windows 8 operating systems. Going to Windows 10 will give your machine new life and make it more maintainable.

If you're comfortable doing the kind of technical research and work I have described here—or are able to get someone that is comfortable doing it to help you—then I think you should go ahead and make the switch. Many people have had very smooth experiences with upgrading to Windows 10. But don't expect yours to go that way. Expect trouble and prepare for it.

I can tell you that at this point, I am pleased with the results of upgrading, although, I had to spend a handful of hours on the task over several days. I'm hoping that now that I've acquired this experience, upgrading my other machines will be easier. Keep your fingers crossed.

Update 8/26/2015
Our family has now successfully installed the Windows 10 upgrade on an all-in-one, a desktop PC, and a laptop. The upgrade went without a hitch on the last two. In using Windows 10, we have encountered some pleasant surprises while experiencing a surprising lack of unpleasant surprises. Kudos to Microsoft.

I wanted to install the Windows 10 upgrade on one of our Windows 8.1 machines, but the system would only allow me to reserve it, so that Microsoft can roll out the product in waves. I suppose this helps the company manage its customer support. Several sites provide instructions for forcing your system to begin the download. I followed the steps provided, but the download did not begin. I guess I will just have to wait.
Posted by Scott Hinrichs at 8/23/2015 04:54:00 PM