Christmas was an amazing time when our children were young. The joy and excitement of the season all came to a head on Christmas morning when we would watch the little ones get so excited about a relatively inexpensive gift that they didn't want to take time to open their other gifts. Infants and toddlers were often happy just playing with the packaging material.

They were so easy to please back then. Many of the items for which they pined weren't terribly expensive. And they had two sets of living grandparents that insisted on spoiling them to excess each Christmas.

Although many of the things our children received those Christmases long ago are long gone, I still have one toy secretly tucked away in my dresser drawer. I keep this dead electronic gadget because it reminds me of an event that was very powerful at the time.

That year the thing that our two oldest children wanted more than anything else was a Giga Pet. I didn't like the idea at all. Although those things were all the rage that season, I knew that they required constant attention, including feeding, cleaning up, and interaction routines. Kind of like a real pet, but without the cuddliness. I thought the kids were too young for this kind of thing. If we were going to get something like that, why not just get a dog?

As a side note, I now know after three years of dog ownership the answer to that question. It comes down to dog hair, having to make arrangements for dog care whenever we go anywhere, the cost of real food, having to clean up real poop, and dealing with neighbors annoyed at the dog's barking. But the love factor is much greater.

Against my wishes, the two oldest each received a Buzz Lightyear Giga Pet among their other gifts that Christmas morning. Given their young ages, they had some challenges getting the things up and running. But eventually they started to figure them out. 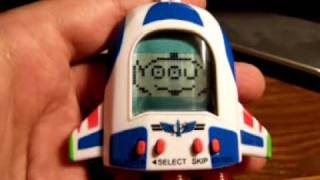 After the morning rush was finished, I prepared for my daily workout. Back in those days I spent about an hour doing fitness walking each day. It had snowed an inch or so during the night, but it was already warm enough that it was melting off the parts of the road frequented by car tires. There was still snow on the road shoulders, but it would pose little problem.

As offspring #1 and #2 saw me getting ready, they asked if they could go along. We had a two-seat fitness stroller and the kids generally loved to take a ride with Dad. My wife heartily approved because she needed to nurse the baby. As we bundled up the two riders, I forbade them from bringing their new Giga Pet toys, fearing that the toys would get lost. Besides, there was no way they could operate the things with mittens on their hands.

We loaded up the children and headed out onto the nearly deserted roadways. Since we had to stick to the shoulders, I was walking in the snow most of the way. As I was unloading the kids from the stroller upon our return, child #2 suddenly realized that he could not find his Giga Pet — the very toy I had banned from the trip. We searched through his outerwear and stroller seat, but the toy was not to be found.

After the scolding and the I-told-you-sos, I looked at my little child and was overcome with a wave of empathy. No, the toy wasn't very important in the grand scheme of things. It was replaceable, although, that would have to wait for a day or two. But the child pleaded for help in finding the toy.

The toy had to be in the snow somewhere along our route. But the thing was mostly white. The rear side was almost completely white. How could we find such an item in miles of snow? My child suggested that we could pray.

I thought about it. A prayer to find a frivolous toy. A toy that had gotten lost due to disobedience. Weren't there much more important things to pray about, like expressing gratitude for everything we had or seeking blessings for those truly in need?

Finally we knelt and my child uttered a simple but very heartfelt prayer. I prayed too. Then we got in the car and started driving slowly along our exercise route. It was relatively easy to follow the three-wheeled tire tracks and footprints in the snow. But I kept thinking to myself that this was nuts.

About a mile from the house I felt a quiet yet firm prompting to stop the car. I was careful not to drive over our stroller tread marks as I parked. I got out of the car and felt like I should start looking in the snow just ahead. I slowly walked next to the path I had left earlier, carefully looking down at the melting snow.

Ahead of the car about ten feet I saw a small depression next to one of my footprints. It could easily have been anything. I had already seen hundreds of similar depressions as I had driven along our route. But I felt very calm inside. It was like I was being pulled to that precise spot. As I stepped closer, I reached down into the snow and felt my child's Giga Pet.

We had a prayer of gratitude in the car before driving home. My young child had simply accepted that this would be the outcome. But I saw a miracle. I could have driven up and down that route all day long without finding the small toy. Or the toy could have sat there until the snow melted and it was found by someone else. Or a car tire could have unknowingly smashed the toy. Instead, I was led directly to the spot where the toy had dropped into the snow after a few minutes of searching.

Some may scoff at my estimation of this episode, saying that people like me think that God is a ready replacement for a metal detector. But they weren't there; I was. Would the Great King of Heaven truly take time to answer a prayer about something so small and superficial? If I am fully honest with myself, I must admit that I still know within myself that this is precisely what happened.

Later as I pondered the events of the day, I gained a little greater insight into God's parenthood. I'm sure that much of what we pray for is largely meaningless in the eternal scheme of things, even things that seem crucial to us. Yet just as I was willing to go out of my way to help my child with something that was tremendously important to him at that moment, I believe that God willingly goes out of his way to help his children when they pray in faith about things that are extremely important to them at any given moment, simply because he loves them. And if he is willing to do so for relatively insignificant matters, how much more willing is he to answer prayers about truly meaningful matters?

God always answers prayers out of perfect love for his children. Thus, he thankfully grants us what will be best for us from his eternal perspective, and not always according to what we think we want at the time. Some will note that this seems like a tautology — any outcome following a prayer of faith is God's will.

But God does not leave us without access to a witness. The Holy Ghost can confirm that a given outcome is God's answer to prayer. And this is how I still know deep inside that God guided me to that Giga Pet in the snow years ago. I know that refusing to admit this would offend God; something I can ill afford to do, given the regularity with which I mess up otherwise.

Within a few weeks after the Giga Pet prayer, the kids' Giga Pets melded into the menagerie of toys about the household, only to be played with on occasion. I was frankly quite glad when the batteries died and the things quite chirping. Years later during cleanup of a toy tub, I found the long dead Giga Pet and was reminded of the poignant events of that Christmas day when the toy was lost and then found. I have kept the device in my drawer since finding it to remind me of how willing a loving Heavenly Father is to answer prayers of those that humbly pray in faith.
Posted by Scott Hinrichs at 10/25/2014 09:08:00 PM