A Diet of Blended Punishment 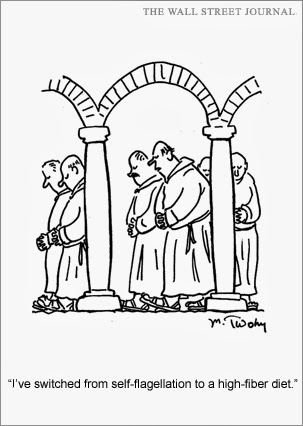 I don't watch much TV. We were recently told by a sales rep that we could get the premium cable package for $6 more per month than what we pay for internet access. (Well, that and the cable box rental, fees, etc. Probably more like $40/month.) We talked it over with the family and everyone voted against it. We've seen cable at other people's houses. They've got lots and lots of channels ... of stuff that we just aren't interested in spending our time watching.

Recently as I was reclining in a dental chair I became even more convinced that our decision to remain free of cable TV was the right choice. I couldn't help staring at the ceiling where a TV had been placed directly in my view field. It was either look at the TV or concentrate on the pattern of tiny holes in the adjacent ceiling tiles. I'm not much into staring into the hygenist's eyes at close range—an activity that I reserve for my wife.

Since I had declined the complimentary headphones, I was spared the audio portion of the TV program. Even without sound, trying to ignore the blender infomercial was like trying to look away from a gruesome traffic accident. While they were selling a mere blender (which clearly wasn't a Blendtec industrial strength model), they were hawking it as some kind of fountain of youth cure-all answer to all of your weight and health woes.

I watched as blenders full of a variety of carefully arranged, extremely choice and tasty looking produce items were presented. Then someone would press a button and wham-o! The gorgeous cornucopia was immediately reduced to a horrid looking slurry that closely resembled the consequences of consuming such a diet on an uninitiated intestinal tract.

The worst part was when they showed families of people drinking the stuff with smiles on their faces. The irony of people wearing store bought grins showing the teeth that they should have used to grind up the whole food instead of letting a machine do the work was apparently lost on the marketing folks. Some of the younger family members were obviously having difficulty maintaining their goofy smiles. I couldn't help but wonder how much they had to pay those people. And how much the mom and dad had to threaten their kids to get them to go along.

What's up with this whole blender fad anyway? Beyond simply providing nutrition, food is supposed to "please the eye and gladden the heart" (D&C 59:18). Reducing a meal to sub-baby-food gruel destroys the presentation, which is an important element of the human dining experience.

Like other food fads, people will rush to try the blender fad. Then after they realize how difficult it is to do, how unpleasant it is to consume (and to digest), and how little it apparently affects the health conditions they hope to resolve, they will revert to their standard diets. Their magic blenders will gather dust on the counter or else be relegated to some remote shelf for storage. Sure, there will be die-hards that stick with the blender diet (maybe because they're into self punishment). But they will be a small minority.

After my dental appointment I had little appetite. Not that the dental work caused problems. I was just a little queasy from the blender infomercial. Maybe my dentist should more carefully screen what is shown on the office's TVs.
Posted by Scott Hinrichs at 1/20/2014 08:49:00 AM