Dog training doesn't go nearly as smoothly for us as it looks in all of the training guides. Our pup joined our family last December as a 10-lb ball of gorgeous white fur. Now at six months of age he weighs in around 42 lbs. He still has lots of beautiful white fur, but he also has a few very light brindle colored markings (all of his siblings were brindle colored). Under his coat his skin appears to be mostly pink with chocolate colored spots. 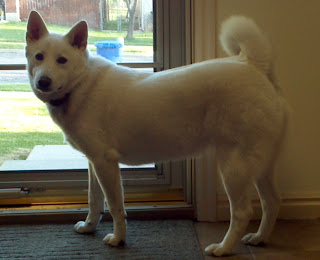 We gained a lot of benefit by attending a puppy training class as a family. We have worked to continue reminding ourselves and our dog of what we learned in the course. We have also taught him a few additional tricks.

But it turns out that our very smart pooch also has a mind of his own. Apparently this is a common trait for his breed. He obeys ... when he wants to. I swear he's worse than my kids. Sometimes when I take him for a walk I think he is really starting to get it. Then he finds something to which he wants to pay attention and he ignores my commands until he's good and ready.

The dog really loves to greet people when they come home. He runs to the arriving person and snuggles up close to them while wagging his tail and laying his ears back against his head. When he is mellow, he will often roll onto his back with an open invitation to scratch his chest and belly.

Our critter does his share of sleeping. But he also has very active moments during the day when he wants to run and play. He loves playing tug-o-war. Sometimes he does what my kids call the "puppy dash" where he runs pall mall through the house trying to keep from being caught. He runs and runs, sharply cornering and making tight maneuvers while family members laugh and play with him. After a few minutes he is done. He goes to his bowl to lap water for a while.

We are trying to teach the dog that getting on the furniture is unacceptable. As instructed by the trainer, we started with the most benign form of correction. That works some of the time. But my wife put her foot down when it came to the dog jumping up on our bed. (He can jump pretty high.)

When the "off" command didn't work as well as we liked, we escalated correction. Per the trainer's instruction, we started keeping an air horn on the headboard of the bed. The next time the dog jumped up there we blew the horn once and he jumped right down. The next time he galloped toward the bed, the dog stopped cold in his tracks the moment my wife brandished the horn. She didn't even blow it. He still jumped up there last night during one of his rowdy moods. He jumped down before I could get the horn.

Our dog is very aware of which things are off limits. He's not allowed in my daughter's room; mainly because she has so many stuffed animals and toys. The dog has his own stuffed animals, but he knows that my daughter's are off limits. Still, he watches like a hawk for her bedroom door to be open. He dashes in there whenever he gets the chance and then runs away like a cheetah with whatever prize he has scored in his jaws.

The dog does the same with my wife's slippers and shoes, although, we're working on disabusing him of that behavior. He also seems to have a great affinity for facial tissues, regardless of whether he gets them fresh from a tissue box or used from a trash can.

We house trained the dog when he was small by frequently taking him out in the backyard and praising him when he'd eliminate out there instead of in the house. That bit of training has stuck very well. He now goes to the back door when he needs to go. But he often waits until someone will accompany him to the backyard to watch him pee. He then waits for praise. He thinks it's a great game. 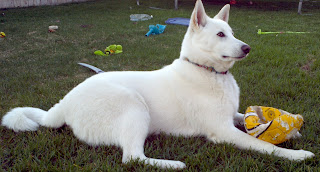 My youngest son felt badly when the dog was neutered. (My daughter wanted to know what was broken on the dog that needed to be "fixed.") My son pined about the fact that the dog will never experience the joys of romance and offspring. My oldest son tried to explain that dogs can't experience those things the same way as humans, despite what you see in the movies.

When we got the dog, the kids promised to properly care for him. They're not too bad about feeding him when needed. But now that the novelty has worn off, they're not too good about taking him for walks or scooping poop. At least, not without a lot of cajoling and badgering.

Our dog's breed is not real 'barky,' so he doesn't bark a great deal. Unless he wants in the house. It turns out that our backyard neighbor isn't very tolerant of this. He calls if the dog barks more than 10 times in a short period. I love my neighbor. But the funny thing is that his family has a strong track record of making all kinds of noise at all times of the day and night. I can't help but chuckle at the paucity of self awareness each time a complaint is lodged.

All in all, the dog has been a good for our family. Training is still somewhat frustrating. And we have to worry about dog care anytime we think about going away for more than a few hours. But it would be untruthful if I said I was sorry for getting the dog.
Posted by Scott Hinrichs at 5/01/2012 07:49:00 PM