For some time I had planned to drive my son to Camp Loll, BSA on July 2 so that he could begin working there for two weeks as a camp counselor trainee.

Normally the first week of campers arrives on the last Monday in June. That means that the first weekend in July is the conclusion of that week and preparation time for week #2. By the time week #1 starts, the staff has usually been in camp for two weeks. During that time they prepare the physical facilities and train to run the camp program.

We started out the day stopping at various points to pick up staffers on the trip northward. Our caravan was larger than usual because we had more people and gear than usual. We made a stop in Idaho Falls and then had lunch in a park in Ashton, Idaho.

We put gas in the vehicles and then started the 34-mile drive to Camp Loll. Once the pavement ended I was surprised at how good the condition of the dirt road was. Given Delose Conner's posts (and pictures) of attempts to reach camp over the past few weeks (6/12, 6/21, 6/24, 6/27), I thought the road would be worse.

Then we arrived at the stretch that leads down to Calf Creek. This section gets less sunlight. We expected that we'd have to dig through snow drifts here, but the depth and length of the drifts were surprising.
We started applying manual labor to the situation. Some thought that it would have been good to have a snow plow on one of the trucks. But the snow was so densely packed that I doubt that would have been much good. The stuff had to be chopped up and shoveled out.

Unfortunately we had only about a dozen shovels. Most workers were reduced to using their hands to throw aside snow chunks created by the shovel wielders. I brought three scoop shovels. The staff managed to break all three of them.

At one point we tried to get a Jeep through one of the drifts. It got high-centered so that the wheels could get no traction. The workers quickly got busy digging under the vehicle. They finally hooked a tow strap on and pulled it out by human power. 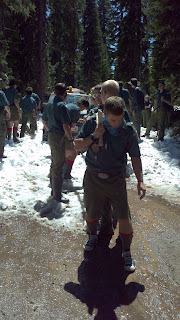 A family from Layton soon came hiking up the road over the snow banks. They had left their truck parked at the beginning of the drifts and hiked into camp. They showed Delose pictures of the road into camp. They said that once we could get past the 400 yards of drifts we were working on that the road was pretty good until the turnoff to the Camp Loll road. Half of that final two-mile stretch to camp was also heavily snowbound.

Sensing that the day was waning, Delose assigned the rangers (all 18-25 years old) to continue working on the drifts, hike to camp, and stay the night in the lodge. They were then to bring all of the digging and chopping tools from the lodge back to the snow drifts in the morning.

I don't yet know how the rest of the story goes. The plan was to ferry the staff back to the snow drifts this morning to spend the day working on getting vehicles as close to camp as possible, and to do whatever was necessary to get the gear hauled to the lodge. It's a hard working way to spend a Sunday, but they don't know what else to do. I pray that they will get the staff and their gear to camp by tonight.

In the meantime, camp leaders are having to figure out how to deal with the nutrition, hydration, and sanitation needs of this large group of young staffers. It's a tough challenge.

The warmer temperatures and the clearer skies means that snow is now melting rapidly at Camp Loll and surrounding areas. The roads might be passable in a few more days even without digging. At this point, the staff cannot wait for that to happen naturally.

Tomorrow was to be the beginning of the second week of campers. The council has already cancelled the first two weeks of camp. The loss of that revenue presents a serious budgetary challenge for the camp. Camp leaders hope to get the camp and the staff ready in one week so that they can host campers on July 11. Once they survey the condition of the camp, they will know whether even that date is too optimistic.

Camp support people here at home have been working to find some way to get a tractor up to the snow drifts. But that's a problem. Many owners of such equipment have gone away for the holiday weekend. Even if such equipment could be secured, a trained operator would be needed and both the equipment and the operator would need to be transported to the location. The staff will likely solve the problem through hard work before all of that can happen.

While this is a tough spot for camp leaders and staffers to be in, it will make for deep memories. It will also likely foster a special bond among the staffers that have this experience. Although I worry about my son, I am grateful that he has an opportunity to be part of this. He is rubbing shoulders with some very high quality youth. I hope he learns much good from them as they go through this experience together.

UPDATE: I just got word that they were able to get the staff and vehicles into camp at 4 pm today. There is lots of snow in camp, but it is melting rapidly. As has happened in other heavy snow years, the staff will work at doing snow removal in critical campground and program areas throughout this week. There will still be plenty of snow banks around when troops arrive next week, but they will hopefully still be able to run a regular program.
Posted by Scott Hinrichs at 7/03/2011 05:05:00 PM

Any news on how it is going in camp getting it ready?

I hear that they have worked hard and that the camp is ready to receive the troops that will be coming tomorrow. I understand that there is some concern about the bear situation. With the summer arriving so late, there is less forage available for the bears. They will have to make sure that the troops are vigilant about following bear precautions.

The first year of Camp Loll (Lake of the Woods), we (Camp Staff) were driven out by blizard conditions in early August.